Pulling Back the Veil and Exposing Your Genuine Fears 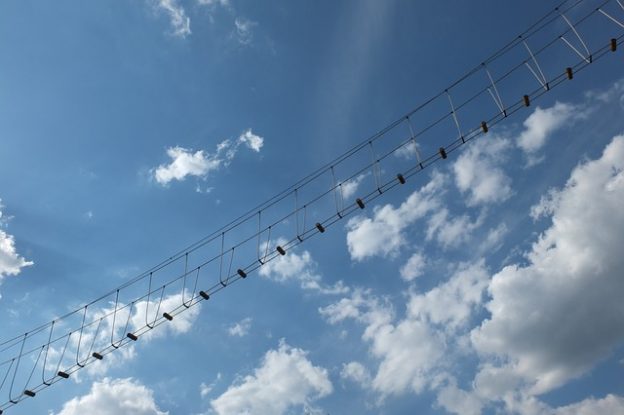 As far back as I can remember, heights have posed an unwelcomed challenge. I was the kid who scaled the jungle-gym only to become paralyzed at the summit and tearfully beg for rescue. Ferris wheels are totally off-limits and, even today, escalators require a mental strategy.

So, I never dreamed of spending my days balancing atop an extension ladder, but the chipped and peeling exterior of our old house begged for my attention.

After repainting the easy-to-reach portions, my three-step ladder quickly became insufficient. Lacking the superhero trait of Mr. Fantastic, I had to engage some problem-solving skills and a ladder seemed my next best option. It took a little self-hypnosis, of sorts, to talk myself up that first ladder, but work awaited and time was fleeting. I let go a little, and convinced myself that a fall from a standard ladder couldn’t inflict too much damage.

Now our lovely home was built on a downgrade, so while the front door was a mere three steps from the solid ground, the rear was two-stories above stable earth. That standard ladder only raised my stature to the lower heights of the our home’s backside and painting only half of the house didn’t appear sensible. An extension ladder became unavoidable.

Step by step, paint supplies balanced in my right hand as my left hand secured its death grip on the metal side rail, I inched ever higher toward the firmament.

Positioned at the ladder’s apex, I briefly dared to look down, a long, long way down. My previous risk estimations made from atop the standard ladder somehow didn’t ease my mind because from this height surely parts could break that might not be mendable.

Let Go of the Fear

Surrender and prayer were my last and best resorts. “Let go,” I persuaded, “let go of the fear.” Fear constrained me to the ground, but surrender could loose its hold. Reciting a prayer, I offered up my terror and released myself to the care and keeping of my guardian angel.

It’s amazing how fear has the potential to overpower in some cases, or to protect in others.

Years ago, I read a book by Gavin DeBecker called The Gift of Fear. In it, Mr. DeBecker gave real life examples of how people’s natural-born fear mechanism, or intuition, set-off red flags and sirens in the presence of serious dangers.

Those who listened to their internal sense typically avoided entering the danger zone, or quickly fled before a perpetrator could inflict harm. Those who over-rationalized away their instinct generally paid a painful price. In those cases, fear was a gift bestowed on the individual, a signal by which they could gauge a circumstance or assess a stranger’s unspoken intent.

Fear Needs to Be Addressed

Often we have lovely, young couples register for our course to fulfill a marriage preparation requirement. Or sometimes they’ve attempted to self-study and feel the need for more instruction.

Patiently they sit through our witness talk and intently they follow along with the training, but sometimes I can detect the fear in their hesitations and read it in their body language. Some fear that they are not smart enough, or vigilant enough, to learn and apply the method, so as to postpone a pregnancy.

Beneath that fear, of their ability to apply the method properly, is the deeper fear of their procreative powers.

Outside Forces Are In Control

Quite often, the women have been controlling their cycles with hormonal birth control or contraceptive devices. These “outside forces” have led to the perception that fertility, or at least its suppression, is the responsibility of some “thing,” not the individual woman.

She feels relieved of her role in family planning beyond the routine exam and prescription refill. If an unexpected pregnancy occurs, she “blames” the it on her contraceptives.

Truly, the effectiveness rates of NFP methods are equal to (up to 99% effective) the best contraceptive rates (though that doesn’t mean they are morally or ethically equal).

A woman has the same chance of conceiving on the pill as she does practicing NFP/FAM. But the couple must practice self-mastery over their sexual desires, if their goal is to postpone a pregnancy with a natural method.

Our modern culture has duped couples into believing that sex has only one purpose; when in truth, it is meant to be both unitive and procreative.

Sometimes people question why birth control is unethical if naturally spacing children is not. Rightly, couples can deem themselves not in a position to welcome a child at a given time, but their plan to avoid the fertile time doesn’t directly frustrate that procreative end.

God designed woman with fertile and infertile phases in her cycles. In choosing to abstain during the fertile time, the couple is simply working within the system God designed.

A well-used analogy goes like this: Two men have families to support. One man gets a legitimate job, works hard and provides for his family’s needs. The other man sells illegal drugs, makes fast cash and pays his bills. Both men have fulfilled their role as provider, but clearly their methods are not equal.

The culture also pushes the notion that children are a burden to the marriage/family, so fear stems from that thinking. We’re suppose to worry about college tuition, braces and trips to Disney World even before the baby is born. It’s no wonder newlyweds are frightened at the prospect of enlarging their family circle.

Far from true, children bring countless gifts to a family. They create an environment that invites their parents to move beyond their small, self-serving circle. Additionally, when marital trials come (as they always do) parents have a vested interest in working out their differences in order to preserve stability for their children.

Let’s think about the term unexpected pregnancy. If a couple is engaging in the sexual embrace, they risk a pregnancy. It doesn’t matter if they are contracepting or not. Sex between a fertile man and a fertile woman (during the fertile time) can result in a child. That’s why the only 100% effective means of avoiding pregnancy is 100% abstinence.

So the term, unexpected pregnancy, is illogical. Sex produces babies, at least some of the time. Couples who practice NFP/FAM understand that and take responsibility for it.

Fear, in the case of our students, isn’t a helpful natural instinct, but an emotion,fueled by man-made distortions. Couples need to identify their fear, face its source, and work together to overcome thinking/beliefs that are erroneous, or misplaced.

Once they manage their fears, they are better prepared to ascend the ladder of faith together. In time, some will even learn to surrender their man-made plans, allowing God to expand their limited view of happiness.

Next time, let’s consider: (1) Reclaiming Womanhood: Why It’s Time to Rethink Your Birth Control Plan; (2) Demystified: How the Female Fertility Cycle Works; (3) The Nitty Gritty of Birth Control and the Abortion Back-up Plan; (4) Knowledge Is Power: How Doctors and Big Pharma Profit From Ignorance; (5) Pulling Back the Veil and Exposing Your Genuine Fears; (6) Now That You Know, What’s Next