The Case for an Infant King 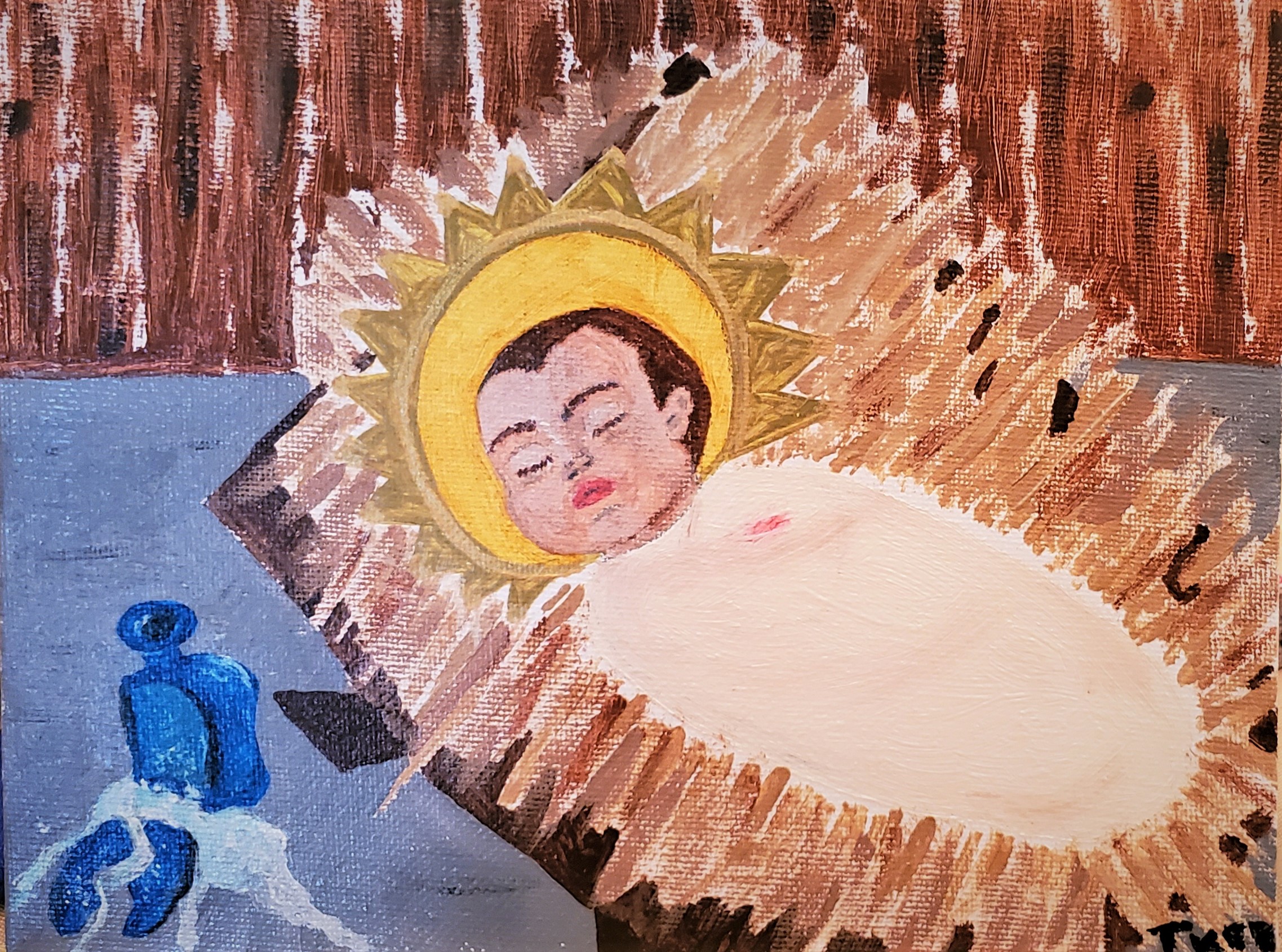 During a retreat I attended, the priest offered a correction that changed my perspective on life and faith. Simple and direct, his one-line instruction challenged the ideals I’d accepted as true and set me on a course toward deeper union with Christ, the Infant King.

We Are the Linchpin

A women’s silent retreat, the chapel was filled with women, mostly mothers. As females, we tend to be doers, helpers, care-takers. We raise children and run households. We support others and make our way in the world. We’re the prayer warriors, the organizers, and the volunteers.

And, if we’re honest, most of us would admit that we see our role as the linchpin, the one who serves to hold it all together. Most of us believe that our input, specifically our actions, determines the end result in our marriages, our families, our work places, our relationships, our churches, and the world at-large.

Of course, this belief, that we are responsible for the success or failure of all things within our scope of reach, isn’t just a feminine mindset. Men also cling to this vision.

It Packed a Punch

I suppose that’s why our priest-director offered us such words of wisdom. “It doesn’t all depend on you,” he said. A simple statement, but one that packed a punch.

It doesn’t all depend on you, or me, or anyone – alone.

As a twenty-first century American, as a homeschooling parent, as a Catholic living in post-Christendom, self-sufficiency and autonomy are foundational principles on which I’ve constructed my understanding of who I am and who I am meant to be. Yet, as the director pointed out, that attitude needed dismantling or at least re-orienting.

So it was with this internal struggle in my mind that I asked the Holy Spirit to renew my perspective. And I found myself led into a meditation on the nativity of Christ. Now, as words rather than pictures are my ordinary mode of expression, I was surprised by the experience that followed.

My mind’s eye transported me back to Bethlehem, back to a cold, dark night outside a roughly constructed stable. There, I stood peering through splintered boards at an other-worldly scene. I saw a humbly dressed man with a coarse brush in his calloused hand scraping away thickly-caked residue of dust and animal saliva from a manger.

Watching, it occurred to me that the man, St. Joseph, had crafted a fine cradle for his expected child while back in Nazareth. In the months before this night, he’d put to use his skills as a master carpenter and built a sound bed of hardwood. He’d lovingly designed and planned, cut and sanded, built and carved a one-of-a-kind crib for Mary’s Baby. What joy it must have given him to utilize his talents in service to his growing family.

But travel for the census meant leaving the beautiful, hand-carved, wooden cradle behind in Nazareth. It meant abandoning his well-crafted plans for provision for his wife and child. Furthermore, it meant accepting the lowly invitation to a stable when no one else was willing to offer a more suitable place for the Child’s birth.

So, wanting to aid his beloved wife in the less-than-ideal circumstances, Joseph had to improvise with the supplies on hand (meager, second-hand supplies). He found nothing but a feed-trough to substitute for that missing crib.

As my daydream continued, I saw Joseph finish the long, arduous task of cleaning and filling the now-hollowed space with fresh, pungent hay. Then, I witnessed him drag the heavy manger beside his dear, young wife and instruct her to lay the Babe down.

At that moment, I spied the beautiful Blessed Mother’s obedience as she wrapped the Child a little tighter in the swaddling cloths and placed His tender body on the rough straw. With a mix of joy and sorrow on her radiant face, I watched a single tear escape her eye and fall upon the Baby’s cheek.

Inspired by the tender scene of family life, I felt drawn into the stable, too. I envisioned myself as a young girl slipping around the open doorway and eventually coming to rest on my knees beside the Christ Child’s bed. Peace, joy and awe flooded my heart and mind as I contemplated the reality that God had truly entered into human history as a helpless newborn.

There was so much more that I experienced during that meditation, but the overwhelming lesson was an understanding of the need to rekindle devotion to Christ, the Infant King.

Focusing on the adult ministry of Jesus is indeed necessary. We must ruminate on the gospels, model His works, and contemplate His Passion and death. But as a people who have become so attached to self-sufficiency, worldly knowledge, and personal achievement, focusing only on Christ’s self-directed actions too easily confirms our misguided belief that we are the catalysts of motion. We then erroneously draw the conclusion that it all depends on us.

However, Jesus first came as our Infant King. The omnipotent God came in total humility, deprivation and silence. The One Who made all came vulnerable to all.

In art, images of the Christ Child typically depict a chubby toddler or a small, hardy-looking child. And while Jesus did grow to match those forms, He didn’t begin that way. He began as all newborns do: tiny, delicate, and wholly dependent on others.

Why would our Creator choose to enter into human history in such a manner? Why would the Divine King Who commands the planets to revolve and the sun to shine come first as One Who couldn’t lift His own head? Why else but to teach us the enduring value of utter poverty, complete detachment, and unwavering trust.

No human stage of growth is as capable of expressing the realities of complete dependency as that of infancy. And God chose this stage to begin His work of salvation. He chose to memorialize it in scripture so as to give us a model for our own faith.

While St. Joseph had to supply the man-power for cleaning that make-shift crib, he was dependent on Providence for every provision (from the stable to the manger, from the inspiration to the straw). Just so, I also have to do the work assigned to me for my state in life, but I must do it with the realization that God is the true Source of every good action, the Provider of every need.

My heart beats and my lungs draw breath without my conscious decision, but still the world is fond of teaching that I am my own master and control is mine for the taking. And how readily I cleave to that idea. However, that dear young Mother in the stable left a shining example of how to live life in sincere union.

Humbly, obediently, she followed where she was led without complaint because she knew that it didn’t all depend on her or Joseph. Indeed, from the first utterance of her fiat, that opening which allowed God to enter into human history, it was God Who begat Jesus and it was He Who ordered all things after for the Holy Family.

That tear, I was privileged to see in my dreaming, was a reminder that obedience and humility bear a cost. But what small price are sorrows and hard things when weighed against the salvation they secure?

The Creche and the Cross

God was, is, and will be working at every single moment. The creche and the Cross both have lessons to teach us. They are inextricably linked. But today, in 2022 American life, perhaps more than in any other age, we need to enter into that nativity scene anew and worship our Infant King.

The journey of detachment from this world, which is a requirement of every person, is a communion with the Infant King. It is a letting go of our expectations and the desire to know the future. It is the acceptance of being cradled in the arms of Providence and laid in the manger of the present moment. It is the realization that we are both called to hold our Infant King in our hearts and to be held by Him.

If we do so, we will be confident that everything is ordered for our good at every moment. And we’ll rest in the assurance that there is no failure in God’s salvific plans.

“We must put all speculation aside and, with childlike willingness, accept all that God presents to us. What God arranges for us to experience at each moment is the best and holiest thing that could happen to us.” – Jean-Pierre de Caussade, Abandonment to Divine Providence