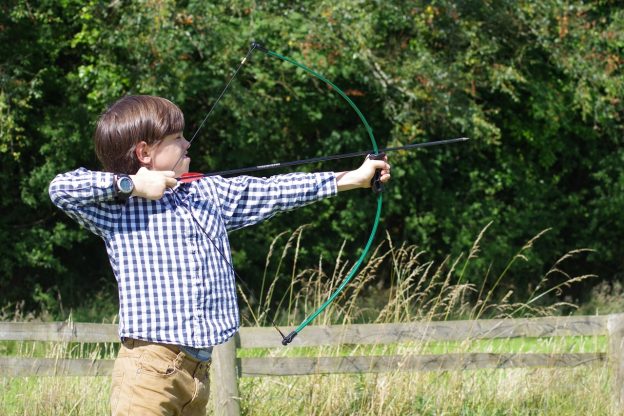 I lifted my head out of a book and spied my young son headed for my bedroom. It was still time for schoolwork, so I was curious about his plans. A moment later, before I’d had the chance to interrogate him, he reappeared with our pellet gun in hand.

“There’s a hawk in the yard,” he said. “It’s circling the chickens.” And with that he headed to the back door, slipped on his sneakers, and exited with the weapon in his grasp.

As I watched him go, I felt a sense of pride in my boy. Yes, he was interrupting his school lessons, but there was something profoundly valuable that was unfolding in that moment. My young son had identified a genuine threat and he’d immediately made the decision to combat the enemy. Indeed, it is precisely because of lessons like this that I continue to be a staunch advocate for homeschooling.

Of course, I wasn’t always a defender of weaponry or really of boyish bravado in general. When my older sons were little, I tried to form them into some gentler image of manliness. In the early years of my mothering, there were no guns of any kind allowed in the house (or toy box). But no matter how hard I tried, I couldn’t prevent those first boys from fighting off bad guys with their finger guns and stick pistols.

I couldn’t silence the “pop, pop” or “bang, bang” of my imaginative heroes, who made it their waking mission to fend off invisible attackers. So, I relaxed my rules and an instant later the toy box filled with plastic guns and foam bullets.

The One Year Experiment

Then, as the family grew and societal circumstances evolved, my husband and I decided to engage in what we affectionately donned The One Year Experiment. We decided to try our hand at small-scale homesteading in order to teach our children the how’s and why’s of basic self-sufficiency.

Because we weren’t altogether sure that our venture would be a success, we made a one year commitment (hence the name of our plan). The set timeline insured that we wouldn’t throw in the towel too soon and it also gave us both the option to renege our support after the one year mark was reached.

In It For the Long Haul

Well, The One Year Experiment ended close to a decade ago. In the course of time since then, we’ve raised and processed (a polite term for slaughtering) a couple of pigs, planted and harvested a few family-sized gardens and kept a varied assortment of fowl.

As of today, our less than two acre square of earth serves as home to 4 ducks, 12 chickens, a rooster, 2 rabbits and some indoor/outdoor pets. I guess it’s fair to say that we’re in this for the long haul.

One of the things that you quickly learn when you’re attempting to secure your own food supply, be it plant or animal, is that there are real threats lurking. From weeds and squash bugs, to foxes and hawks, the opposition against you can be persistent and fierce. Coming to that realization, we eventually invested in the tools needed to defend our property (e.g. a pellet gun).

One Lesson Begets Another

I would be remiss if I didn’t point out that protecting our belongings and livestock, even with relatively low-powered weapons, definitely led us into many discussions about safety and the value of all life. And isn’t that the way with most things in homeschooling? One lesson begets another.

So watching my son step out into the yard with the intention of defending that which he regarded as worthy of protection, I was both proud and grateful.

I was proud that on his own, he’d identified a problem and enlisted a solution. Furthermore, I was proud because he gave priority to defending something which could not defend itself.

And I was grateful because a thousand other lessons I’ve tried so hard to teach my children blossomed in that action. From our pro-life stance to our Catholic understanding of justice, from lessons on responsibility to the basic tenets of farming, my son was employing his youthful knowledge. And yet, to him, it seemed like nothing more than a simple task: chasing away a hawk.

We were already planning to make our monthly confessions in the evening. It was already on the calendar, being within the 8 day window of a First Friday. But, now, in light of my son’s farmyard expedition, it seems all the more fitting.

For what more troublesome and persistent adversary is there than sin? And what better way is there to protect the soul then to vigilantly patrol for sin and immediately defeat it when we find it lurking?

There is a time for gentleness and peace. Conversely, there is also a time for swift action and fierce defense.

As a mother of boys, I thought that I needed to restrain their natural tendencies in order to form gentle men. But (thankfully) their inherent masculinity prevailed so that they could become the kind of gentlemen that the world really needs.