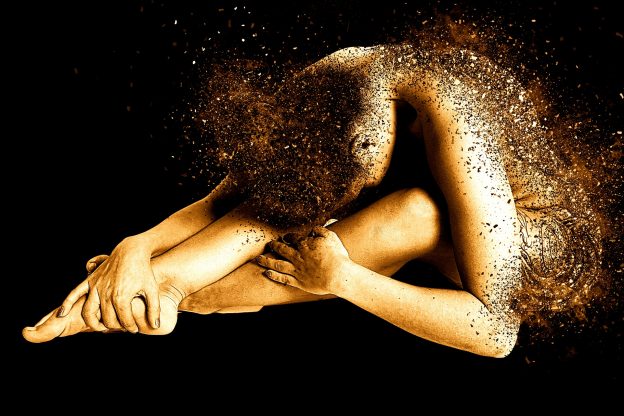 Springtime in my fourth grade year, they lined us up, boys on one side, girls on the other. The boys got shuffled off into one classroom, while we girls got ushered into another. Giddy and curious, we whispered and fidgeted while the teacher set-up her materials. That was the day I first heard about periods. By the end of the lesson, I knew enough to utilize a maxi-pad and understood the general gist of the fact that my body could one day grow a baby. Over the years, my knowledge pool would grow (I’d graduate to tampons, discover Motrin for cramps and get myself put on contraceptives). But aside from the basic facts of menstruation and the understanding that I was fertile, the extent of my education hadn’t increased far beyond that fourth grade lesson. No worries though, my annual trips to the gynecologist were enough to leave me feeling confident that I had it all under control.

Married young, I suffered through our first few years together with daily bouts of nausea and monthly crying jags (okay, my poor hubby suffered too, having to contend with my nauseated, weeping self). We were in our early twenties and unready for children, so I swallowed my daily Pill and accepted the unpleasant consequences. Finally, my husband had watched enough of my misery, so he suggested that I stop the Pill. Eagerly, I abandoned that plastic wheel of synthetic hormones and secretly I hoped for a pregnancy.

Erratic, sporadic cycles of varying lengths followed my choice to ditch birth control. Clueless, I made an appointment with a doctor. In her office, I explained my reasons for coming off of the Pill, shared that I was now only menstruating every few months and begged her help. She explained the Pill could regulate my cycle problems, but I said I wasn’t interested in going back on birth control. So, she handed me a blank temperature chart with the simple instructions to take my temperature by mouth every morning, record the data and return in a few months. That was it. I left scratching my head.

Demystified: The Science Behind the Cycle

Unfortunately, too many woman are left with the same rudimentary education that I had when it comes to their fertility and more often than not they, too, are receiving inadequate (if not downright erroneous) instruction from their doctor. We need to be educated about the female fertility cycle.

To define the term, a cycle begins on the first day of a woman’s menstruation and it ends on the day before the next menstruation starts. It consists of three phases. Phase I begins with menstruation and ends with the onset of signs of fertility. This phase is generally infertile, meaning it is unlikely that intercourse in this phase will result in a pregnancy. Phase II begins with the onset of the fertile signs and is thus fertile so intercourse during this phase can result in conception. Phase III is again infertile and it is determined to begin after measured bodily signs confirm that ovulation has completed.

The Fluidity of Fertility

Note that an ovulated egg is only fertile for approximately 24 hours, but Phase II generally ranges from seven to ten days. The reason for the discrepancy is because the female body produces fluids that aim to extend the life of sperm. Those fluids allow the female body to store and nurture her partner’s sperm for up to five days after they have engaged in intercourse.

Fascinating really when you consider that under a microscope cervical mucus either displays a block pattern or a channel pattern. The block pattern (which is produced by infertile mucus) looks a bit like a brick wall and it creates a barrier against incoming sperm. In opposition, fertile mucus looks like open channels which corral the sperm (the channels actually filter out abnormally shaped-ones) and allow them unfettered passage toward the Fallopian tubes.

The Same, But Different

Every women experiences the three phases in any given cycle, but the length of those phases is not necessarily static; therefore, individual women have individual cycle lengths. Hormones drive the dance of the female fertile cycle and in doing so those hormones cause readable changes in the woman’s body. I now know that the chart that doctor handed me was meant to record my basal body temperature, my temperature upon waking (at the same time each day and before eating, drinking or exercising).

Women can assess their state of fertile/non-fertile by watching for progression in their cervical mucus, becoming familiar with the changes in position and firmness of their cervix and by confirming a sustained shift in their basal body temperature. With this information, a woman can determine, with a high rate of effectiveness (99%*), where she is in her cycle on any given day and apply that information to either achieve or postpone pregnancy.

Of Mucus and Flowers

And like a new flower bud starts out firm and tight, so is the cervical o’s hard and closed during the infertile phases. Then continuing like the bud, the cervix softens and widens in the hopes of allowing sperm to enter during the fertile time.

If she is seeking to avoid a conception, then the couple simply does not engage in sexual relations during the fertile phase. There’s no need for third party input, devices or prescription drugs, the couple need only choose to shelf or redirect their sexual desires for a time. Practicing periodic abstinence does nothing to harm or control the cycle.

On the contrary, the ultimate green family planning, couples who work with the cycle never introduce chemicals into the body or the environment (because the woman on hormonal birth control deposits chemicals into the environment each time she flushes the toilet.) And then there’s the advantage of the “honeymoon effect” which we’ll talk about later in this post series.

My Problems Were Masked

When that doctor told me that the pill would fix my cycle irregularities, she was being dishonest. Hormonal birth control doesn’t correct the cycle, it only creates a bogus cycle. My problems would have been masked, not fixed. Sadly, many women buy this logic and unknowingly cover up a health problem.

Unfortunately, once the Pill taker finally decides she wants to conceive she may find that the timing wasn’t what she’d hoped for because there’s an underlying issue that she must now correct. That was my story, it took us more than a year each time when we were trying (in earnest) to conceive our oldest two children.

I’ll Take You, Minus Your Fertility If a woman has to suppress her natural hormones and thwart her essence as a life-bearer in order to satisfy her partner than he is not honoring her dignity. He is picking and choosing among her attributes, saying, “I’ll take you, minus your fertility.” Whether consciously or not, he is rejecting a part of her.

Often women in our Natural Family Planning (NFP) classes come to this epiphany and it can be painful. We taught a doctor and his wife in one of our classes. I remember her turning to him midway through and asking if he’d known that the hormonal patch she’d been on had serious risks. He answered yes, and she wanted to know why he allowed her to jeopardize her health when clearly there was no reason for it. He shrugged.

When women learn to read their cycles, they often report a renewed sense of self-worth. They see themselves as not only whole, but purposeful, and they feel rightly entitled to be treated that way.

A healthy function of the female body, fertility can’t be separated out while still maintaining the balance of the whole. If you amputated your foot, some part of you would always be missing. You might learn to compensate for the absent appendage, but the fact would remain that some part of you was gone.

Women often can’t place their finger on it, but they sense this. Not surprisingly, couples who practice a method of NFP have only a 5% rate of divorce by comparison to the 50% rate in the population at large. Clearly, when couples treat one another with dignity and respect, honoring the wholeness of each person, their relationship is positively effected.

There are several methods of Natural Family Planning or Fertility Awareness Methods (FAM). You can learn more about them through home study or by attending classes. There are also a number of reliable apps and devices on the market that make the recording and charting of your fertility signs as easy as the push of a button. But ultimately, the greatest success of any NFP/FAM method comes from proper and adequate education.

Next time, let’s consider: (1) Reclaiming Womanhood: Why It’s Time to Rethink Your Birth Control Plan; (3) The Nitty Gritty of Birth Control and the Abortion Back-up Plan; (4) Big Pharma and Your Doc: Your Ignorance Pays the Bills; (5) Pulling Back the Veil and Exposing Your Genuine Fears; (6) Now That You Know, What’s Next

*The effectiveness of a fertility awareness based method to avoid pregnancy in relation to a couple’s sexual behaviour during the fertile time: a prospective longitudinal study.