What a Black Baby Doll Taught Me About Prejudice 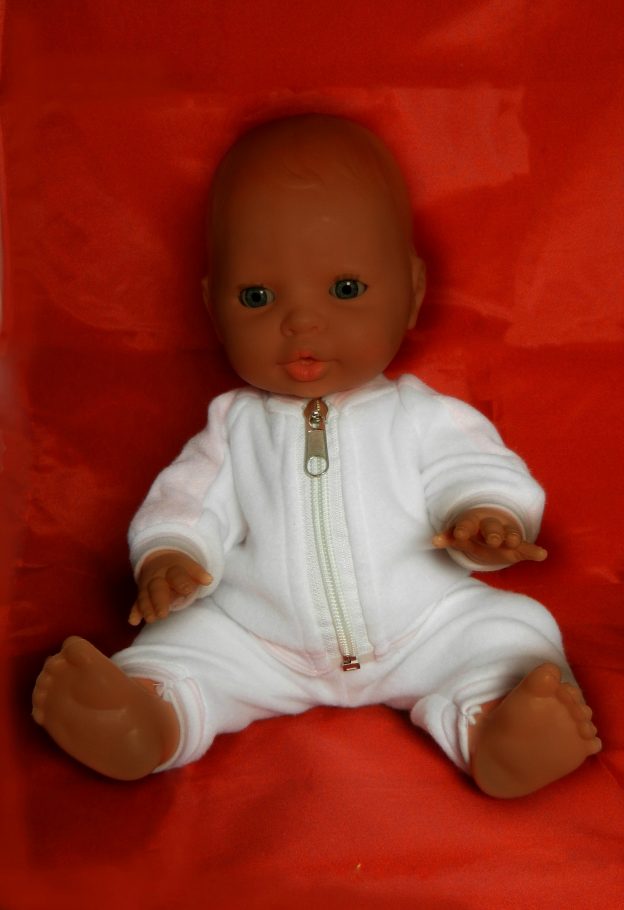 Standing there in the aisle of Toys ‘R Us, my eyes darted left then right. It was such a hard decision; choosing how to spend my birthday money.

I can’t recall how many aisles we’d visited, but I do remember settling myself among the baby dolls. There were babies that cried and those that wet. There were molded-haired dolls and ones with blonde locks ready for brushing.

My five year old budget probably narrowed the choices, but for a few minutes it felt as though the world was at my disposal.

This Is the One

Then my eyes landed on her. Neatly banded inside a stiff cardboard box, she was the answer to my shopping dreams. I studied her hard plastic features through the translucent pane of plastic. She came with her very own pink blanket which at the time seemed like a notable perk.

“This is the one,” I told my mother as I reached for the box.

Unlike some dollies who come was pre-assigned identities, my girl’s naming rights belonged to me alone. So, sometime between the cash register and our return home, I sorted through the endless list of name possibilities and settled on Pinky.

From that day on Pinky and I spent countless hours together. I dressed her, fed her, bathed her, rocked her and told her all of my secrets. Though I was an only child back then, I somehow already knew what babies required and Pinky was my baby.

A few months later I had the occasion of taking my first ever plane ride to Florida. Traveling solo, I was flying down south to meet my Cuban family. Naturally, while packing my suitcases, I made sure to tuck Pinky into my carry-on bag so that we wouldn’t be separated.

My memories of the flight from New Jersey to Florida don’t extend far beyond my playing with paper dolls and drinking soda, but what happened after the plane touched down still resonates in my mind, forty years later.

My abuela (grandmother) didn’t speak a word of English and I didn’t know a lick of español, but her warm greeting broke the barrier. That is, up until the moment she spied Pinky’s hard, plastic head poking out of my backpack.

Words got exchanged over my head that I couldn’t translate, but I was none the wiser as I dutifully followed my extended family to their car. Sitting in the backseat, I soaked in their unfamiliar chatter and tried hard to look brave in this strange new setting.

Then something unexpected happened. The car turned into another toy store parking lot. Wow, I was thinking, what were we doing here?

Once again I found myself surrounded by dolls of every imaginable shape, size and ability. It was like I’d won the kiddie lottery! Abuela, chattering away in her foreign language, pushed me toward the one doll who seemed to have and do it all (diapers, powdered food, eating utensils and potty talents). I’m not even positive she was the one I wanted, but needless to say that was the doll we left with.

Of course, I was so enamored with the newness of the toy, as well as overwhelmed by the unpredictable circumstances into which I’d been thrust, that I barely noticed Pinky’s absence. That is until the day my uncle informed me that we were taking a four hour road trip to Disney World.

Relegated to the Back of the Suitcase

Four hours was a really long time for a five year old to sit still (before the dawn of hand-held games, auto TVs and cell phone apps) so I figured I’d need some toys to keep me occupied. And that’s when I noticed that Pinky had been relegated back into my luggage bag.

Just as I attempted to pull her to freedom, by uncle found me and informed me that I was only allowed to take one doll along for the ride; and Pinky wasn’t the one that was allowedYou see, Pinky was a black baby doll with chocolate-brown, plastic skin; whereas, I am a fair-skinned, freckle-faced, red-head (obviously owed to my maternal Irish roots). The new baby doll, with her pinkish-white rubbery skin and blond locks, was supposed to look like me. And apparently little white girls were supposed to play with white baby dolls.

Teaching Me a Lesson

Now don’t get me wrong, I loved my abuela. She was a good woman and I know that her prejudice stemmed from ignorance, not malice. However, all the same, she was teaching me a lesson that even my immature brain knew wasn’t right.

In the decades since I’ve dissected this occurrence many times. My abuela had herself faced injustice in a bad marriage, a communist country, and a less than perfect family. She’d felt rejection. Yet rather than disavow injustice, she passed it on.

If We Look Hard Enough

Unfortunately, I think if we all look hard enough into our own hearts we may find similar ideas.

Maybe we wouldn’t segregate ourselves on the basis of color, but perhaps we have no problem keeping away from those people. Maybe it’s because of their political affiliation or their religious devotion. Maybe we keep our distance because their abilities are different than ours or their portfolio is beneath our financial bracket.

Maybe we say Black Lives Matter rather than all lives matter. Or We Stand With Blue without acknowledging that individuals are capable of virtue or vice.

Judging a Book by Its Cover

Whatever the reasoning, I’d venture to guess that almost everyone of us is guilty of judging a book by its cover; and thereby, missing out on the value inside or inadvertently overlooking a serious flaw when the exterior looks familiar.

To be fair, as parents, we need to raise children who are capable of making right judgments (e.g. is this stranger safe, is this food good to eat, can I trust this person’s promises) so it is unwise and untrue to simply chant, “We can’t judge.” The Real Lesson to Learn

Instead, the lesson to bury in our hearts and pass along to our children is the credo of the late Martin Luther King, Jr., “that people should not be judged by the color of their skin, but by the content of their character.”

Of course, we cannot truly know a man’s character without first welcoming him in as an equal.