Why I Kneel For Jesus 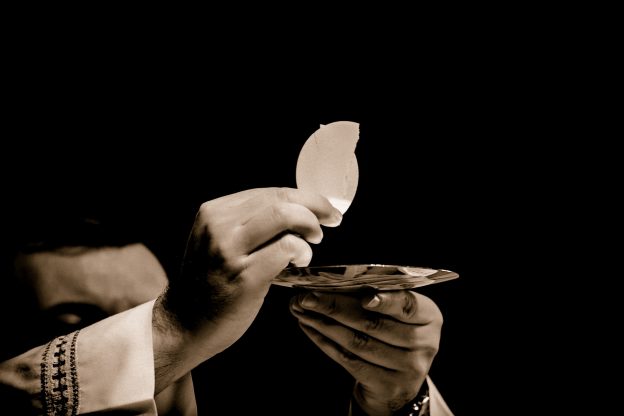 Receiving on the hand had long been part of my routine, before it finally came to my attention that there was another, more preferable way. I suppose I just hadn’t given it all that much thought, sadly. In grade school we’d been taught the proper hand positioning, but my generation missed out on the altar rails and their purpose.

Yes, intellectually, I knew that the Body and Blood of Jesus is truly made manifest in the Eucharist, but I’d adopted a “casual” reverence. Hands crossed I quietly waited my turn in the communion line, until reaching the Extraordinary Minister at which point I accepted the Blessed Sacrament in my palm.

Sliding back into the pew, I’d pause for a bit of head down-turned, silent prayer. For years that moment signaled the fast approaching end of Mass with only the final blessing and closing song to follow.

I remember distinctly the very first time a priest introduced me to the “old” kind of reverence. He was visiting our parish, the kind that hosted 45 minute Masses on Sundays. Once the last communicant headed back to his seat, Father returned to the altar singing “O’ Sacrament Most Holy” while with careful attention and genuine devotion, he cleaned each chalice and paten until not one miniscule speck of Jesus could have been left behind.

Entranced by curiosity, I followed his every movement as he wiped and inspected, rubbed and examined. Father’s obvious love for the Blessed Sacrament and want to protect Jesus from any careless indignity, captivated me and stirred an ember in my heart. Unfortunately, Father’s appearance was a one time blessing, but it was enough to inspire a sincere reflection.

Time passed at that parish and then the witness of an egregious sacrilege at a First Holy Communion celebration caused me to reconsider the lessons I was now allowing my children to encounter. Added to this, my son came home distressed from Sunday school one week because a little classmate had hidden Jesus in her pocket. And finally there was the Faith Formation teacher who’d told my little ones that Communion was merely a symbol of their Lord.

So came the realization that if my own focus had been skewed by perfunctory worship, how could I now ignore the long lasting affects of errors and omissions in my children’s faith journey. After much prayerful discernment, we left and God planted us temporarily in a parish dominated by seniors. What a gift that was to our growing family, being immersed in a church home where traditional reverence was the norm. No more jeans and sneakers (for us as well), no more homilies that left us thirsting and most importantly no more rushed communion lines and swiftly discarded vessels.

It never ceases to amaze me how patient and gentle God is with me. The perfect Father, He knows just how and when to reach me. Never impetuous (like me) He redirects and corrects a little here and a bit there as the gardener who sets out to straighten a bent tree.

A move led us to search out a new parish, but we did so with cautious consideration. Not that I advocate church-shopping, but history had led my husband and me to weigh the merits of attending more (versus less) traditional Mass celebrations and the latter now seemed unsatisfactory.

By the grace of God, we found our new parish home and instantly knew it was where He intended us to raise our family. From that very first liturgy, that ember in my heart which had been stirred into a slow burning flame was fed all the more.

Like that visiting priest, Father moved slowly through the consecration, giving thoughtful consideration to each word he uttered. And upon returning to the altar he would show no less care and love for the sacred vessels. His silent motions were a visible prayer. My understanding of and love for the Blessed Sacrament increased beyond the intellectual, but there was more to come. It was a simple statement posted on Facebook by a seminarian. “Kneel for Jesus,” he typed.

Kneel? I’d never considered that position, but after reading those three words I was convicted. It just seemed proper although so foreign to me. Sharing the experience with my husband, he seemed ready to adopt that humble stance without hesitation, as well did our children.

Admittedly, it took some courage those first few Masses to lower myself before Jesus. Not that I struggled with recognizing my smallness, but I worried that somehow someone might misconstrue my kneeling as a sign of “holy pride.”

“Look at that woman with all those kids, she’s trying to appear all holy, you know,” is what I imagined them saying behind my back. But then again I suppose there was greater merit in learning to forget the judgment of others because none of this was about me anyway.

If Moses had to cast off his shoes in order to step on sacred ground, how is it that we came to this time in history when we’ve so removed ourselves from the right practice of reverence?

More than Moses, we are able to partake of the very real Body and Blood of Jesus Christ, but casual worship has blinded many of us to the treasure resting in our hands. We may never even consider whether our hands are even clean enough to touch His Precious Body or that we could carelessly drop our Lord on the dirty ground.

Hard to really capture in words, the act of kneeling and receiving on the tongue has deepened my affection for Jesus and given me opportunity to pay Him homage in a way that I’d previously been neglecting.

Understandably the devoted are no longer required to kneel and for some people the position may be impossible, but for me there is no longer any other way. Not because I think myself a better Catholic (I am not), but because I can no longer quiet that still, small voice that beckons me to lower myself and receive, rather than stand and take.

Remember the woman who bent down on the floor in order to anoint the feet of Jesus and how she dried them with her own hair? What an act of charity that was.

Remember that Jesus Himself got down on His knees in order to wash the feet of His Apostles. What a lesson in humble service that was.

Like Moses, we are privileged to meet our God. We are called to His table and invited to consume His Living Bread and the realization of that should knock us off of our feet, literally.

Called to His table, invited to consume Living Bread, the realization of that should knock us off our feet, literally. Click To Tweet

*the original version of this post appear in May 2013