Even Naughty Kids Get Gifts on Christmas 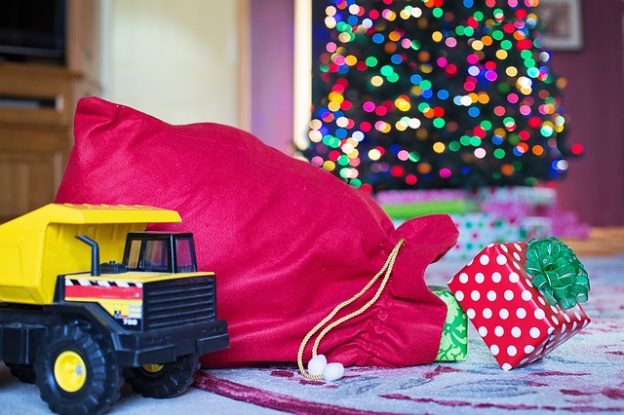 After a busy morning of wrangling my children followed by an afternoon manning a craft table at a children’s Christmas Craft Fair, I decided to appease the requests of my younger crew members (aka sons and daughter under 12yo) who’d been begging to visit Santa at the mall.

I had a few errands to run beforehand (think clothes shopping with 4 less-than-interested companions), so I figured that the promise of a stop-over to see St. Nick would be ample incentive to keep the whining at bay.

My high hopes for a pleasant twirl among the shirt racks fell flat when one child made it his mission to express his displeasure with my plans (every.five.seconds) as the craft fair ended. Then ushering my youngest boys back into the van the bossing, bothering and bickering seemed to hit high gear before I’d even turned the ignition key.

I contemplated scrapping the plans for Santa, but I didn’t want to short change my daughter who’d been well-behaved and helpful up to that point. Although my daughter’s days of believing have passed, I knew she still relished the chance to pretend and to escort the toddler up to Santa’s lap so I stayed the course and drove to the mall.

Standing wide-eyed before the big guy, my little boys conducted themselves like cherubs. There was no pushing, shoving or fussing, just smiles and polite conversation. They were on their best behavior for the few minutes it took them to tell the jolly, old elf their top-of-the-list desires.

However, the angelic demeanor evaporated once we exited stage left.

By the time we made it back outside to the parking area, I had to strong-arm an overly-independent (but underly-cautious) child across the lot (picture me struggling to carry a 50lb. angry contortionist between parked cars while scanning the surrounding area for kidnappers and texting-while-driving vehicle operators).

Of course, this act made the child-in-arms about as happy as a wet cat which led to an all-out brawl between Mr. Independence and his closest sibling once I’d set him down. Once the dust settled, but while my anger and disappointment were still at full pitch, I had the idea to return a few of the waiting Christmas gifts that lay hidden in my bedroom closet.

Judging by Santa-standards, two little boys from my brood ranked high on the naughty list. And we all know that Mr. Claus doesn’t reward the not-nice children, right?

By the grace of God, I had the good sense to refrain from verbalizing my intentions and instead allowed the Holy Spirit to chasten my temptations as I steered toward home.

I thought about God’s mercy and how many times my behavior falls short. I considered how undeserving I am of the gifts He showers me with every single day. I remembered that while God does correct me, He never withholds mercy. So with that understanding in mind, I realized the need to wipe the memory slate clean and not let yesterday’s mistakes erode tomorrow’s joy.

I did, indeed, dole out some necessary penalties for the offending parties that afternoon, but Christmas morning found my children, all eight of them, joyfully tearing into each paper wrapped present. And as eager as they were to receive, they were just as enthusiastic about giving the gifts they’d purchased or made for one another.

Long forgotten were the petty arguments and heated debates between them. No one held a grudge over the minor irritations or unfair advantages that had seemed so important on many days prior. The Spirit of Christmas penetrated their hearts and motivated their actions.

It was then that I recognized the mercy of Jesus reflected in the character of Christmas’s rosy-cheeked man in red. Santa Claus’s un-equaled generosity and inescapable joy are simply a pale resemblance of the True Spirit of Christmas.

So too than is Santa’s mercy toward children, both naughty and nice, a fair likeness to the unending and undeserved mercy of Jesus.

3 Comments on “Even Naughty Kids Get Gifts on Christmas”