Scoring for the Right Side 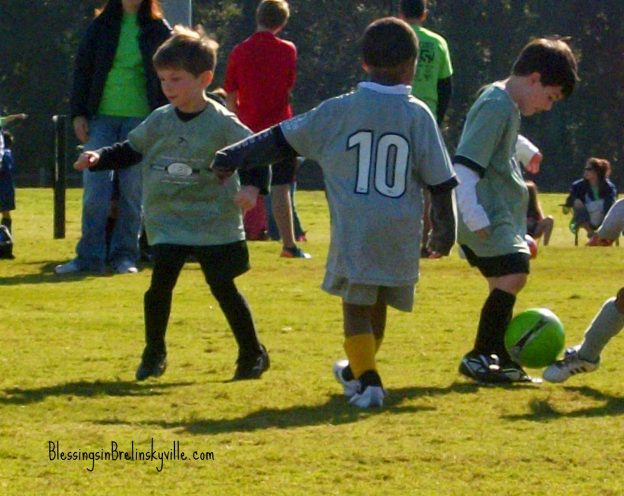 Like a swarm of bumblebees that buzz one way and then the other, their little bodies bump and rub as they move in unison after the rolling target. The air is booming with commands, but the rush of adrenaline has rendered the players deaf.

Just as some tense on-lookers bound from their seats, arms waving wildly, the pint-sized leader boldly takes the perfect shot straight into the goal.

The proud victor beaming, he turns to receive the expected praise. But all his fans can muster are feigned smiles and wagging heads because the happy player, who’d forgotten his team’s colors, has just scored a goal for the OPPOSITION.

It’s been a couple years since we’ve sat on the side-lines of a soccer match. We’ve had players in every age division at one time or another and we’ve been those parents, the ones whose miniature athletic prodigy has made a goal for the wrong team.

It’s painful and frustrating to sit by and watch. “Just look up,” your thinking, “look up and identify your goal.

In his spiritual exercises, St. Ignatius of Loyola outlined the great war for souls being fought between Satan and Jesus Christ. Each side, Loyola explained, consisted of an army carrying their Master’s standard, or banner, into battle.

Satan’s flag bore the words Honor, Riches and Pride (his directives for ensnaring men’s hearts). In contrast, Christ’s high standard was the Cross and on it were etched the words: Poverty, Humiliation and Humility (His requirements for converting hearts).

The two opposing factions each meant to win men to their camp.

Just as the mini-soccer players have brightly colored shirts and goal markers to distinguish their side, it would seem that the doers of good or evil also have clearly identifiable standards to denote their end goal. But in the chaos of war, men too easily get turned around, losing sight of their destination, or simply the path which leads to it.

Satan purposefully saturates the battlefield air with screeching demands. Whereas, Christ, with gentle whispers and inspirations, invites men to join Him Click To Tweet.

In the thick of the battle, there can be a compulsion to respond immediately (trading blow for blow) with little time to listen and calculate under which standard one is marching.

Time and again I’ve witnessed this scene play out not only on the soccer field, but most often nowadays in the com-box battlefield. Lines are drawn when someone publicly states their position on some hot topic and then a fierce war of words ensues as the opposition feels compelled to rally in defense of truth (as they see it).

I watched it unfold when a well-known pro-life advocate stated her opinion on her social media page. She attempted to convince her followers that they had no choice but to agree with her if they were truly fighting on the same side.

Truthfully, I did not agree with her opinion, but I could understand her logic and my agreement or disagreement really had no significant purpose on this day. I opted to keep my thoughts to myself and simply read through the comments.

It didn’t take long for the harsh criticisms to appear and then came the deluge of nasty name-calling and profanities.

Similarly, I found myself on the receiving end when I attempted to defend Pope Francis’ motivation to a group of so-called militant Catholics. My fellow foot soldiers told me to “shut up” after labeling me an “idiot.”

Chaos is at an all time high for sure in the midst of this on-going battle between good and evil.

Before the age of internet, it took time to respond to a differing view. A letter to the editor or a phone call to your representative required you to invest real time and effort which left more space for reflection and reevaluating.

Now, however, with the stroke of a few keys we can respond immediately to every little statement that rubs us wrong.

Lost completely are the personal connections (body language and tone) which help us to recognize the dignity of one another. Missing are well-formed consciences which call us toward righteous judgement and charity.

We’re the kindergarten soccer players with our knee-jerks reactions.

Losing Sight of the Mission

When we fail to uphold the commandments, to correct with compassion and to forgive with mercy, we lose sight of the mission. At all times we must carry the right standard and follow the rules of engagement laid out for us by Christ Jesus.

The current popular culture begs for Truth to be spoken. Sooner or later, every Christian will be called off the sidelines and put into the game. The times demand witnesses in the public square, courageous enough to proclaim their faith convictions and withstand the roar of the enemy.

And roar he will with insults, accusations, profanities and false testimony. He’ll threaten our well-being and cause us to doubt. But beneath the shouting crowd of naysayers, we can be assured our Lord’s gentle voice continues to encourage us, to cast out fear and direct us toward our heavenly goal.