We Can’t Give Up On Marriage 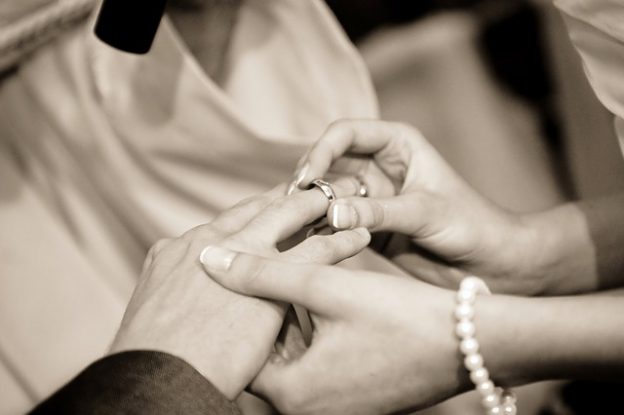 Hardly surprised that we were headed toward troubled waters again, I thought I knew enough to weather the storm (fairly) unscathed. After years of marriage, we’ve endured more than a few disagreements, but most of the time we’ve easily found our footing and resolved our differences.

Marriage is hard work for every couple, we knew that. Yet, when the winds of discord got stirred up this time, I almost abandoned ship.

A little more than a decade ago, my husband and I found ourselves standing on the precipice of a major fault. For the first time, divorce seemed a real possibility. That prospect strummed a chord of fear in my heart as we were a young, growing family.

By the grace of God, we got help from a Christian marriage counselor who showed us how to shore up our foundation by placing God at the head of our marriage. Truly, that trial was a turning point in our lives. We learned to spend more time listening to God and in turn we modeled better examples (of fortitude, charity and forgiveness) for our children.

Our willingness to draw closer to God and His precepts allowed a flood of grace to rush into our hearts and our household during the years to follow.

Considering the recent focus on the family both inside and outside of the Church, it seemed fitting that we’d find ourselves under a spiritual attack, targeted directly at our Achilles’s heel. Thus, I wasn’t startled to sense that persistent nagging in my gut that insisted something was amiss between my spouse and me. Initially, I resorted to prayer, asking God to reveal that which was lurking beneath the surface in our relationship. He answered that prayer, leading my husband and me back into a counselor’s office.

What I didn’t expect was the constant waves of rage that followed. I’d been in this position before, I knew the history and I understood that marriage requires as much mercy as it does love, but this time the roar of anger drowned out every other temperate thought. Additionally, my energy level dropped and my sources of inspiration vanished leaving me frustrated and unwilling to put up much of a fight against the venomous plans swirling in my mind.

All those years ago, when I’d entertained the idea of ending my marriage, it was fear (in part) that caused me to re-evaluate.

This time around, I found myself shrugging off that anxiety. I could do this, I reasoned. I could rebuild my life. We could jump ship and still survive. I started to feel comfortable with the idea of taking the leap out of my sacramental union.

The following Sunday, my husband and I did our usual and hung around the rear of the crowd waiting to greet our pastor after Mass. We both needed his recognition and prayers, but I wasn’t quite expecting the response we got.

Looking at the two of us, he read our tense body language, but still ventured to open the door by asking how things were going. Tears rushed to the surface when I heard my husband inform Father that things weren’t looking so good for us.

Funny how the idea of divorcing had seemed so much more reasonable before that precise moment standing face to face with our priest. Of course, most things look better in the shadows of darkness.

You CAN’T Give Up

Always compassionate and gentle, Father looked us both over and stated matter-of-factly, “You can’t give up.”

You CAN’T give up. Though Father’s tone had been mild and his words few, they boomed and echoed in my ears like a loud call reverberates when projected into an empty canyon.

But, here was our pastor telling us that we could NOT give up.

Can You Drink the Cup?

Providentially, the gospel reading that Sunday recounted the story of James and John telling Jesus, “Teacher, we want you to do for us whatever we ask of you.” He entertained them by asking what it was they would have Him do. “Grant that in Your glory we may sit one at Your right and the other at Your left.”

Jesus hears them. He knows their hearts and He replies, “You do not know what you are asking. Can you drink the cup that I drink or be baptized with the baptism with which I am baptized?” And when the remaining ten become indignant at James and John for their emboldened request, Jesus further teaches, “…whoever wishes to be first among you will be the slave of all.”

When our pastor informed us that we couldn’t give up, he was reflecting Jesus’s response to His Apostles. He was saying that we can’t refuse to drink from the cup if we desire the blessings and grace of the marital union. And what is the cup that Christ offers but a communion in His suffering.

Losing Sight of the Greater Glory

Spending day in and day out with the family, it is easy to focus on the constant sacrifices while losing sight of the greater glory to come. Irritants that we excuse in a distant acquaintance can become a source of daily discord within our own four walls. The repeated faults we tolerate in others (and even in ourselves) can seem like an unjust weight for us to bear when they belong to our spouse. And who more than spouses must be ever ready to exercise the constant requirement to take the lower position?

Yet, home, and the people within it, very often offer us the greatest opportunities for sanctification. I suppose it is for this very reason that the evil one is working tirelessly to destroy the family and substitute it with his counterfeit unions.

I’m not really sure what I thought Father’s response was going to be that Sunday afternoon, but his simple, direct correction was the answer we both needed to hear. Quite the opposite of a stone hurled at our tender hearts, Father’s clear command was the most merciful counsel we could have received.

We still had repair work to do in our relationship, but Father had clearly reminded us that it was necessary work. Indeed, if we desire to be disciples of Christ, if we want to fulfill our sacramental vows, if we wish to model the faith, then we can not cast aside our crosses and steer toward the wide gate.

Marriage, as Father reminded us, requires an attitude of hope and a will that can’t give up.

Marriage requires an attitude of hope and a will that can't give up. Click To Tweet
Catholiccounselingdiscorddivorcemarriagepriest