This Is The Building That Cried Out To God 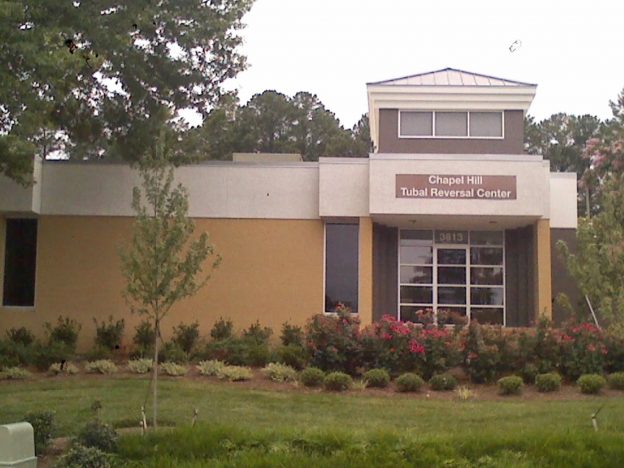 Formerly this building bore the duplicitous name of Raleigh Women’s Health Organization. It was an abortion facility.

A worker, angered by our silent praying one bright afternoon, stopped her car at the end of the driveway. She told me how stupid I was. My prayers, she advised, were useless.

Another day, one of my little ones was full of questions which inspired me to paint him a visual picture.

“Consider the angels,” I said. “Think of them. They must be surrounding this place. The angels are here with us praying for an end to abortion and they’re escorting all those precious, unborn souls back to heaven with them and interceding for their hurt mamas.”

In time, I heard that the clinic closed. After the death of its owner, there was no one willing to run the killing site.

That was then. This is now. Time passed, as it always does and I’d filed those experiences away. Prayers had been answered.Though with so much more to be done to end the scourge of abortion, I continued to pray. But I’d largely forgotten that building.

Then, a friend emailed me this picture of the building as it stands today. It’s abortion services long gone, I couldn’t help but consider those angels again. I imagine they are still there, but now their mission has changed. Now they must be singing hymns of praise and thanksgiving, offering petitions for patients’ healing so that new souls can be planted.

You see, the address now houses Chapel Hill Tubal Reversal Center and its two extraordinary physicians, who are making it their life’s work to restore women’s reproductive health through tubal ligation reversal and corrective tubal surgery. Drs. Monteith and Berger claim that,
“Together they have performed more successful tubal ligation reversals and tubal surgeries for blocked tubes resulting in the birth of more babies than any other doctors in the world.”

We know Who triumphs in the end, but it is always a blessing to see the Hand of God so overtly at work.

They are brought to their knees and fall, but we rise up and stand firm. Psalm 20:8