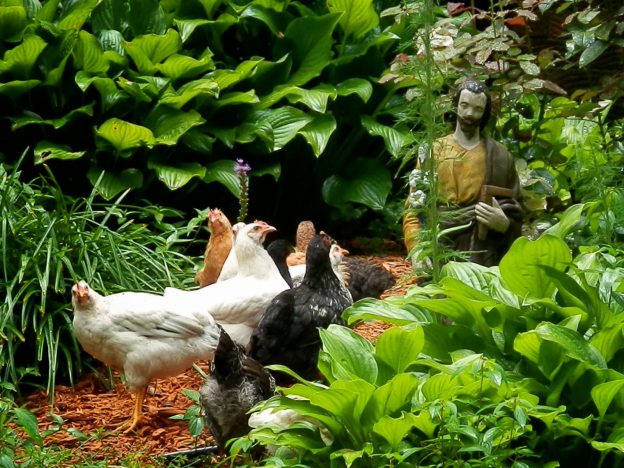 Holed up in the nursery, the baby had just drifted off to sleep in my arms. It was that blissful moment when eyes finally took rest behind their lids and slumber won out over my fussy little one.

The tides of peace and calm rolled in my mama brain. Yes, that four-walled, pale blue sanctuary (aka the nursery) was fulfilling its purpose- quarantining us (baby and me) from the bustling household long enough to give rest a chance to settle in.

Potentially as devastating as a British invasion, loose fowl required a call to arms or my husband’s fledgling garden faced certain doom.

Of course, all tranquility vanished as the baby’s eyes flipped up so as not to miss any sibling activity. After an immediate rallying of the troops and a changing of the baby guard, I found myself running like a chicken with its head cut off around our backyard. Rake in hand, I tried to shepherd the free ranging fowl (which is a bit like running in circles hoping to get somewhere besides where you just were) back through the narrow gate into the fowl’s field.

Ducks aren’t quite as spry as chickens so our web-footed flock readily turned tail and waddled back through the gate. The plump turkey might have stood a chance if not for his long rear plumage which served as a grabbing point for my daughter. But those quick and crafty hens, led by their respective roosters, had us circling through the shrubbery and garden.

There we were (five of the kids and me) armed with sticks and rakes, like a farmers’ militia, shouting strategies up and down the driveway. “Go here…no there.” “In the bush…no under the van.” Had someone clicked the video record button, I’m sure the scene would have merited entry into some Funniest Videos episode.

Two by two, the kids teamed up to corral the fowl as I stood my post at the gateway to our chicken yard. Standing there I couldn’t help but consider the narrowness of that gate.

Sure, just beyond it was a secure area complete with two hen houses, a watering hole and all the compost, feed and tortillas a bird could want for, but our egg layers didn’t have the wisdom to weigh their options. In the moment, they were delighted to scour greener pastures and to scratch up piles of fresh mulch without regard to the impending nightfall and its lurking predators. Opening the gate for the occasional redirected bird, I thought about the Good Shepherd’s instruction. He told us simply to enter through the narrow gate because wide and broad is the gate that leads to destruction, and many are those who choose it.

Most of our chickens avoided that narrow entry since the sun was still high. In fact, the majority that we’d managed to catch returned “home” via air transportation (they got tossed over the perimeter fence). Being creatures of habit, most would have returned to the hen house eventually, but not without leaving a path of destruction in their wake.

God's gift of free will ensures that He won't reach down and fling us over Paradise's perimeter. Click To Tweet

God’s gift of free will ensures that He won’t reach down and fling us over Paradise’s perimeter. No, we must choose to direct our own steps down the straight path. Perhaps, our guardian angels might like to chase us back when we stray, but enforcer isn’t in their job description (although sometimes I wish it was).

I guess, like my flocks, we get distracted by our vision of greener pastures. We forget that, in an unexpected hour, day will draw to an end leaving us vulnerable. Inside the fenced field the birds’ every need is provided, but the ground looks bare after so much pecking and scratching.

When It Looks Greener Elsewhere

Sometimes our faith journey looks that way, sparse and dry on the surface. Then the world and all its enticements beckons our attention and lulls us into abandoning our only true security. We deem the gateway as too constrictive and commit to forging our own way.

Chickens are creatures of habit so most would instinctively head back once the moon rose, but their return would have met a closed gate. Our job as backyard farmers is to protect our layers and we couldn’t put all at risk for the sake of the errant few. Remembering the parable of the late comers in the field, we are assured that Christ’s mercy endures for the sincerely repentant, but so too He recounted the story of the foolish lamp bearers who got locked outside missing the bridegroom altogether.

By day’s end, through no small effort, the children and I managed to cajole or capture all our fowl, excepting a handful of hens and their crowing leader who’d hunkered down in a ditch beside the road (perhaps they were debating the reasons for crossing it). Had an owl or fox come calling in the darkness, those birds would have made an easy meal.

Our Good Keeper gave His all to open the strait for us and He continues to invite us in. Better than any farmer’s provisions, we’ve been promised an eternal harvest if only we are docile enough to enter through the narrow gate before the latch swings closed.