Plugged In On A Thanksgiving Pilgrimage

Updated on September 29, 2013 By Tara K. E. Brelinsky 8 minutes read.
The kids and I just returned from a pilgrimage and visit with long distance loved ones. We started out slow with a stop halfway between so we could attend Holy Mass at the Basilica. The first four hours trapped in a van with six of my dear offspring was relatively easy. Zombified by the new movie screens, stuffed with pretzels and beef jerky with juice boxes in hand, they managed to keep the number of “He’s kicking my seat”, “She’s won’t let me watch my movie”-s to a minimum.

Navigating through the busy streets of Washington, DC under a dripping sky was manageable because in addition to my faithful (mostly) GPS my husband took the lead in our other, little car. He was only accompanying us to this halfway point. A quick turn into the parking lot and a harried dash into the lower level of the church, we made it to our first destination before Mass commenced or bladders gave out under pressure.
My second son spied the confession schedule and relayed that we had just enough time to cleanse our souls before racing into the elevator. I’d like to say I had time to unwind, relax and thoroughly examine my conscience, but as is more often the case I perused the exam sheet with one eye while keeping the other on my youngest sons (who were trying hard to contain their unending streams of energy). 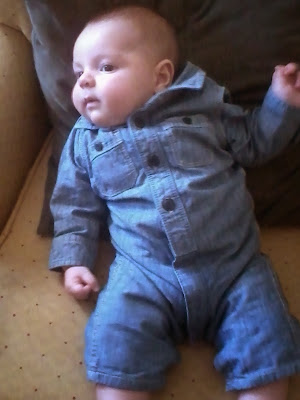 Green light time, I took my turn in the confessional; however, the attempt to kneel behind the curtain quickly went bust when the infant in my arms took to squirming. Afraid my confessor might fear an exorcism was taking place, I opted for the face to face chair so that he could at least understand the reason for the grunts and constant shifting.
Sins relinquished, we (baby and me) made our way to the communal kneeler in the center of the chapel for penance. Awkwardly, balancing myself and my tiny partner on that narrow strip of wood challenged my muscles and my mind. Add to that, the five year old who decided to nuzzle up along side of us and one might wonder if I would have been better off saving my prayers of penance for later.
Cleansed, the crew of us followed the stroller quickly through the marble hallways to the elevator. Crammed into the metal box for a minute or two, we prepared ourselves to participate in the Eucharistic celebration that awaited above. A welcomed renewal, Holy Mass recharged my battery (even if the pews were somehow narrower than usual leaving me a twelve inch span of space in which to remain attentively still while nursing the baby under my wrap as the five year old continued to snuggle against my right side.) 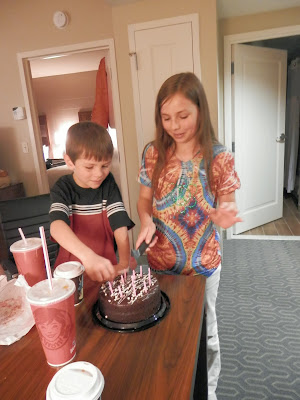 Arriving at our one night accommodations, we were happy to traipse our belongings from the van to the hotel suite. Thank goodness for those luggage trolleys that are just big enough to contain 7 backpacks, 6 sleeping bags, 2 or 3 miscellaneous bags, one suitcase and a pack-and-play. After a meal of fast food, our family (minus our traveling eldest son) sang happy birthday to our newly twelve year old daughter as she cut the cake that daddy had smuggled in his car.

Only about a dozen admonitions of “You can’t jump on the beds”, “Stop throwing pillows” and “Shhh don’t talk so loudly” were required (which I chalk up as relative success in the arena of harnessing little kid energy for so long). By the time ten o’clock rolled around, my eyes decided it was time to close up shop and I didn’t have the desire to fight them. So much for romantic moments with my better half during this getaway, we’d have to wait until some other distant day when we might not be sharing our sleeping quarters with nocturnal offspring (maybe in another eighteen years or so).
Morning arrives all too soon when nights are spent satisfying a nursling, but we had a journey before us which we were eager to continue. Breakfast and gas fueled us for the next four hour leg as we kissed daddy goodbye and pointed our compass northward.
Another few rounds of “His feet are on my head” and “She’s picking all the movies” until our van rolled up in front of grandma’s. Doors opened, our excitement spilled out along with our bodies and belongings. Grandma’s house is actually a four family apartment building that also houses great-grandma, a great-aunt, an aunt and a cousin so our arrival meant an instant family reunion. 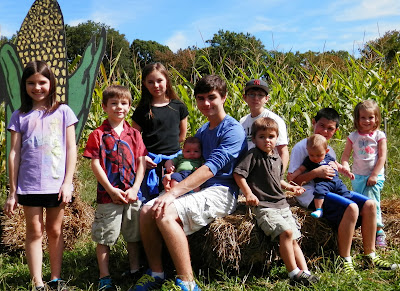 Our next few days included more birthday celebrating, introductions to Pio Gerard and lots of time engaged in good conversations. Ninety year old, great-grandma (affectionately known as GG) lured my 7 and 5 year olds into disarming (their Nerf guns) and playing a few rounds of Go-Fish. A triumph because the two of them managed to be still, focused and polite (as opposed to wrestling, bouncing and bickering) allowing GG to actually enjoy some one on one time with them. 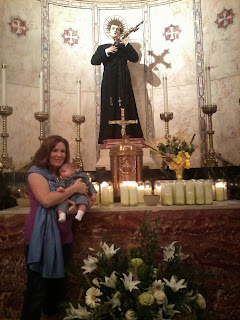 The youngest five and I made a thanksgiving stop at the local shrine of St. Gerard (all the more exciting considering we managed to get locked in a courtyard requiring rescue by a couple of funeral directors!) Then, I convinced my brood to belt themselves back in for yet another long ride to St. Padre Pio’s shrine the day after his feast day. Our arrival was divinely timed as we managed to participate in some of the prayer hour in the chapel and receive a blessing with Padre’s glove and holy oil.

Clear, crisp, fall weather invited us and some old friends, who’d met us there, to lunch together outside. Wide open fields offered the perfect balance to so many hours cooped up in the apartment and the van. The kids ran and shouted, discovered cattails and pitched black walnut pods before we paused to light two candles for the petitions we’d carried on this pilgrimage. We finished off this thanksgiving stop with a trip to the ice cream shop where we met up with my college roommate, whom I hadn’t seen in many years. 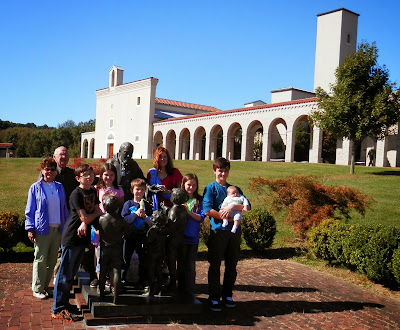 One last day of family time and fun followed before we had to reload all of our bags and bedding. All in all, we and the apartment building made it through our invasion fairly unscathed (only one lamp met its unfortunate end). GG’s peace wasn’t too disturbed (luckily her hearing aids didn’t detect the loud noises banging around above her ceiling.) And the majority of tears shed were the result of having to say goodbye so soon.
Cousins kissed and a decent night of sleep had, I slid behind the steering wheel once more and set our GPS for Brelinskyville. Two cups of coffee, nine bottles of water, two pit stops, numerous “He’s touching me” “She’s not sharing”-s, 20 minutes of crying (the baby, not me) and 8 ½ hours later, the tires came to a screeching halt (okay maybe the screeching wasn’t actually from the tires) in our driveway.
My intention for this trip was well thought out. I planned to make a sincere pilgrimage of thanksgiving, to revisit the shrines we’d discovered last April when I was praying intently for baby’s safe arrival. Having been months since our last meeting, I wanted to reconnect with our loved ones, to allow my children to create new memories of these wonderful people they belong to. Little did I realize that my thanksgivings would increase ten-fold along the way inspiring me to ever greater gratitude for a life so richly blessed.

During that confession at the Basilica, Father used a simple prop to instruct me. Pointing to the lamp on the table beside him, he reminded me that it needed electrical energy in order to light up the room. Before he’d flipped the switch enabling power to surge down the cord, the small space had been in complete darkness. God, he said, was the energy source I needed and by plugging into Him, I am able to transmit His patience, His love, His mercy, His charity… (all those things I struggle with)

Traveling with my kids, I discovered my family functions as my cord. Without them, I’m prone to more self-interest. Having to tend to the immediate needs of baby requires patience and immediate attentiveness. Monitoring those speed demons I call sons demands discipline (on my part and theirs) and diligence. Connecting with my teens leads me let go and honor their individuality. With eyes upon me at all times my actions and words set an example whether or not I want them to. Fulfilling my marriage covenant compels me to be considerate and tender.
What a very different journey this would have been if I’d been unplugged and steering the roadway alone. How truly thankful I am that’s not the case.