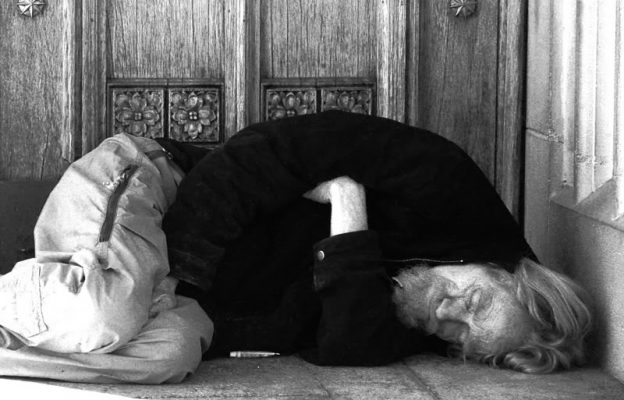 Long, stringy, unkept hair framed his down-turned face as he sat sleeping on the Walmart bench. His ragged, dirty clothes hung loosely so that his size was masked. A hand of fresh bananas laying beside him, someone had taken pity and left the small meal for his discovery when he awoke.

Sometimes he’d find refuge and a bit of charity in a local fast food joint or more often he could be found wandering the streets around town. A seemingly gentle soul, our family began to see him here and there on a fairly regular basis in our old hometown. The local soup kitchen fed hungry residents and visitors throughout the week, but weekends saw their doors closed. At the time, my husband delivered food for a vending company and he often brought home stales (food that was still good, but passed the sell by date.)

We never heard this homeless man beg or even ask for anything, but his poverty was clear. One day, my husband took the time to stop, give the man some food and learn his name was Charles. From then on whenever they crossed paths, my husband would leave Charles with a few leftover meals to fill his empty belly.

Beyond a name, his story remained a mystery, but something about Charles touched our hearts.

I have to admit it wasn’t an uncommon occurrence to have panhandlers knocking on our front door. Most times the story they told had been heard before. “My car ran out of gas around the block. My kids are inside. Can you give me money?” Cautiously, I learned to refuse the not infrequent requests.

And there was the time a glassy-eyed woman rang our bell during dinner. She was hungry and it was Saturday so the soup kitchen had no relief to dish out. Stirred by her polite plea, I filled a bag with food and placed it in her hands. She thanked me and descended my porch steps. I watched as she made her way down the block and then flung that bag full of food into someone’s bushes and continued on her way.

Those kinds of dishonest cries are enough to cause us to tune out or turn away, but then we risk becoming like the rich man who failed to see Lazarus starving in his doorway. Sure, we need to enlist some level of caution because there can be real danger before us. But we can’t excuse ourselves from helping altogether.

Christmas time rolled around and I happened to be shopping in a Catholic book store when Charles came to mind. While I had no way of knowing whether he believed in God or what, in any faith, he proclaimed, a little prayer book caught my attention. St. Joseph’s pocket book of prayers seemed the perfect size for a man who spent much of his time on foot.

I bought that book, took it home and wrapped it in my best Christmas paper. Like a prayer, the details felt important as I folded each corner and turned over every edge before taping them together. It had to be beautiful.

Keeping that gift close at hand, we spied Charles walking somberly across an empty parking lot one evening at dusk. Rolling down the window, I called out his name to which he stopped and turned in my direction. Like a child excited to find presents under the tree, I rushed toward him and thrust that gift into his open hands.

Merry Christmas were the only words I uttered and then we parted ways. He headed for the tree line, me for our van, so I have no way of knowing where that gift ending up residing. Maybe it landed in a ditch like that bag of food or perhaps it rested often in the hands of Charles. Regardless it doesn’t matter, I saw Christ in Charles and that gift was my attempt to be Christ to him. Beyond a meal to satisfy his physical hunger, I wanted him to feel cherished and important.

Beyond a meal to satisfy his physical hunger, I wanted him to feel cherished and important. Click To Tweet

As a mother, I’ve purchased and distributed many gifts throughout the years. Each one represents a little offering of love, but no one ever meant so much as Charles’ gift.

In his poverty he had no way of repaying us. In fact we weren’t even motivated by words of praise or thanks. Charles was simply like Lazarus in our doorway. We saw his need and his dignity and gave to him what we had out of love.