The One Year Experiment: What Backyard Farming Taught Our Family 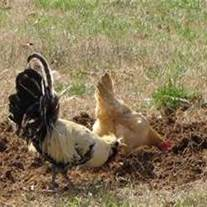 About an hour into my morning, just before my second cup of decaf, I was confronted with a life and death situation. The youngest of our new hatch-lings appeared weak and poorly responsive. We’ve been witness to this type of behavior before and it hasn’t led to a good outcome, but hope springs eternal in our household, so we set about to reviving him as best we were able. Deciding he may have suffered a chill through the night, my son and I took turns cupping the little chick in our palms next to a lamp. Truth be told, I even anointed it with some of Padre Pio’s holy relic oil.

Of course, chickens aren’t people, made in the image and likeness of our Father, but our hearts were stirred, nonetheless, toward compassion and sincere concern for the little chick. It displayed a few brief moments of recovery when it mustered up the strength to stand and utter some gentle peeps. However, about an hour and a shower later, in the presence of my children, with the chick cradled in my hands, I watched it writhe and convulse in its last attempt to grasp for life. Then, that tiny body lies still and lifeless.
My children took the morning’s event in stride, no tears, but there was a definite period of silence. By nature, I have a weakness for tears, so I worked hard to draw back the salty drops which began to well in the corners of my eyes as they asked several times, “How come, mom?”

About three years ago, my husband and I felt led to initiate what we donned our “One Year Experiment.” Having grown-up in the same town only twenty minutes from New York City, we wanted our children to experience something more natural then rows of houses and concrete playgrounds. Having moved to North Carolina years before, we’d spent our early years as a family surrounded by a similar neighborhood setting to that which we’d known as children. Then Divine Providence placed us in the “country.” 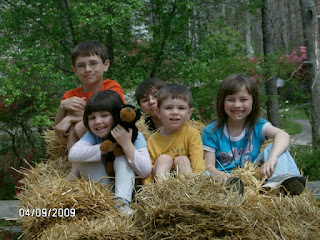 Owning less than two full acres, we realized that that was still adequate space to teach our growing flock of children how food makes its way to their plates. In an age when they are bombarded with mixed messages about the sustainability of the planet, it seems critical to show them how God provides their daily bread.
Chickens were first on the list, then came two pigs for a time, some ducks and a garden full of vegetables. We called it our one year experiment because we weren’t sure if we could manage beyond that, so it seemed right and reasonable to set a limit for ourselves. Truly, we wondered, could two “city” folks, whose experiences with livestock combined to nil, make this work. Together we made a vow to uphold the experiment, there would be no giving up before those 365 days made the rounds.
Here we are three years later, with a flock of 30+ hens, 2 roosters, 5 chicks, 2 ducks and a garden full of summer’s bounty. Talk of a Dexter cow circles around the
dinner table now and again which all leads me to assess the results from our experiment, turned lifestyle. 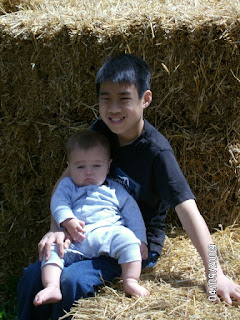 Surely, the provisions of our daily bread are no longer an elusive idea. That is to say, our children understand that food doesn’t magically appear in the grocery store. They know the toil required to plant and to water, to tend and to harvest. Meat isn’t a sanitized, faceless slab on Styrofoam trays. Rather, it comes from the sacrifice of an animal fed by their hands.
In Genesis, God created the earth and every living thing upon it, then He instructed man to fill the earth and subdue it. Life on our meager family farm has exemplified the deep meaning in this command.

Drawing Closer To The Creator

Having hypothesized that this experiment would teach our young ones the value of hard work and lead us to greater appreciation for our provided sustenance, we hadn’t imagined its potential to draw us closer to the Creator, Himself. Because sometimes, even in spite of our toil and best efforts, irregardless of our good intentions and thoughtful planning, chicks die and crops wither. Then, we are led to understand our role as His beloved children, our smallness and His power.
While we are responsible for the care and keeping of this blessing which is our earthly home, He alone is God over all. He set the sun in the sky and He calls down the rain, He provides our daily bread in real and tangible ways. We can choose to cooperate with the Plans of Divine Providence or we can buck and fight against it with our attempts to control, thwart and reorder nature. The latter plan, ultimately, never works out as expected.
Truly, our experiment has imbued each member of our brood with greater compassion for all living creatures, with a more thorough understanding of the requirement for balance in all things, and with grateful hearts.
“Give a man a fish and he’ll be fed for a day,” the saying goes, “but teach a man to fish and he’ll be fed for a lifetime.” In those initial 365 days, we learned to fish, but most importantly we were reminded of the necessity to pray and to trust because God’s promises to provide our daily bread continue generation after generation.