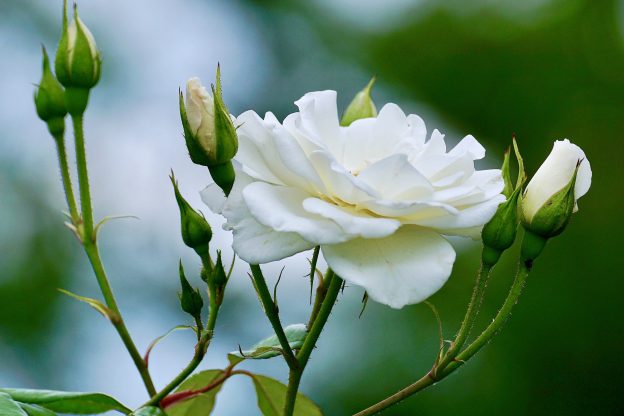 My husband can attest to the fact that I haven’t a single green appendage (aka green thumb); however, I’ve planted rose bushes at every house we’ve shared. Planting them was easy, but the rest I left to nature. Typically, my minimal efforts produced results to match.

When we moved to our current house four years ago, I again planted some new rose bushes just beside our front porch and relocated a resident climbing rose bush to the Marian garden.

Last year, having purchased two apple trees, I felt compelled to try a little harder and so I rummaged through the shed and found a container of plant food. Food in hand, I circled my way around the yard sprinkling here and there our azaleas, apple trees, and my rose bushes.

I’m not really sure why I have this affinity for rose bushes, but just the thought of them brings three beloved people to mind. My mother had some roses planted just across the driveway from the side door (the door we actually used to go in and out as opposed to the front door that only strangers entered through). I think they were peach in color and I have a picture in my head that my mom took of my sister posing beside them.

Then there is the story of St. Therese, the Little Flower, dropping roses to those who ask for her intercession. A grammar school teacher first taught me about her and my college roommate renewed my interest in this dear saint years later. In fact, I offered a novena to the little saint in those hours after our first child, Dimitri, was born when the details of his illness began to unfold.

And, of course, roses always evince a connection to my Blessed Mother. Most of the time when I bring blooms in, I offer them to our Lady by placing the vase on our kitchen shrine. This spring those rose bushes decided to reward my little efforts in so many more ways than I understood at first. Each in turn, the tall, thorny, green stalks began to produce tiny buds that erupted into beautiful flowers of yellow and then red.

The timing of this was something of a gift in and of itself. I began to spy the changes during the weeks surrounding the loss of my husband’s job and the loss of our dear expected baby, who was still cradled in my womb. That is when my secret, daily ritual started. Waking up each morning, I would walk through the house opening windows and doors before stepping out onto the front porch which I’d cross in order to peer over the railing to see what those bushes had in store for me that day.

Simple and perhaps a bit silly, but those bushes filled me with an inexplicable hope and peace. The dilemma for me then was in deciding whether I wanted to cut those blooms and carry them inside to enjoy or allow them to remain on the stem, where their beauty might last a bit longer.

At the end of April when the roses first made their appearance, we had the privilege of being godparents to our friends’ son. In thanksgiving for this blessing and that of our expected little one, I carried those first blooms to Our Lady of Czestochowa and placed them at her shrine in St. Joseph’s Catholic Church.

It was an easy offering on my behalf. Although I admit, I was humbled measuring my tiny bouquet against the two matching arrangements that decorated the table. To the eye, my gift looked unimpressive, but I knew that I hadn’t retained a single blossom for myself. My satisfaction was derived in knowing that I gave everything I had.

During the next few weeks (after that offering), our personal trials increased and so did my daily ritual. Then, one particular Thursday came. We’d discovered the baby’s death some days before, but I was still clinging to the hope of a miracle. Knowing that Lazarus had been raised and so too had Jarius’ daughter been woken from her eternal slumber, I was praying that death would not win again. Since my husband was home (having lost his job), we had the rare opportunity of attending Thursday morning Mass as a family.

As we rushed around preparing nine people to leave by 7:30am, I’d not had time for my peaceful ritual. But, the thought washed over me that I needed to bring today’s blooms to my Blessed Mother. I headed out to quickly clip and plant today’s bounty into a vase for transport when I was overcome by sadness and then anger.

Not Five From Us

There they were in all their splendor, five roses. Five, I counted them again, five. In an instant, without a moment’s hesitation, I realized there was one bloom for each of our five heavenly children. One for Dimitri, one for Mary, one for Simeon, one for Philomena and now one for Matthew, too, how could this be?

“No, no,” I wanted to scream, “You can’t have five from us. You have four already, you don’t need this fifth soul.”

I wanted to pretend it didn’t mean anything. But I knew better.

I wanted to leave those roses home because surely Our Lady didn’t need those stupid flowers anyway, but I knew better.

I Had to Give Them All

So, holding fast to my unspoken anger and searing sorrow, I grabbed the scissors and I cut all five of those opened roses. Hurriedly, I stuck them into a vase as the family waited in the van. It was an internal tug-of-war for me, but I knew I had to give them all. So, silently I did.

At the same time the roses were busy in the front yard, the climbers in the Marian garden were also joining in. The whole Marian garden was filled with the colors of red roses, orange Day Lilies and white Easter Lilies.

During the time we were waiting for Matthew’s delivery, I remember thinking at least the garden was ready for his arrival. It brought me some solace to consider this tiny family graveyard would be well decorated when it came time for his funeral. Perhaps, even more fitting that after we laid Matthew’s hand-sized coffin in the ground, the blooms died, too. And roses stopped appearing.

My memory is rather cloudy nowadays. Time seems to slip passed me. I cannot remember the exact sequence of days and weeks, but you might imagine my surprise and delight when beloved friends brought us a new rose bush in memory of Matthew. They had no idea of my rituals.

It wasn’t until days later (when I asked my little ones to prepare a spot in the front yard) that I read the tag. This bush was a John Paul II commemorative rose bush, and we all know to whom he had great devotion.

So, sometime in June we were gifted with this new plant that was nothing more, seemingly, than a stick with roots in a pot. I was thrilled to have a tangible, continuing sign of Matthew’s brief, earthly life. I figured that if I was lucky, or more rightly blessed, we might see Matthew’s roses in a year or two.

Perhaps, I’m just garden-ignorant (okay, I am, there is no perhaps about it) but I didn’t understand when my husband told me that the bush was growing not even a month later. Finally, I saw those first tiny red leaves for myself, but still I didn’t believe. When he mentioned that buds were appearing, I simply ignored what he was telling me.

Wanting That Stick To Remain Bare

In truth, I liked the idea of a bare stick jutting out of the ground. I wanted it to remain bare and to hide its growth from sight for a year or two. I wanted that rose bush to mirror the way I felt: ugly and unproductive.

Time was necessary (lots of time) for that bush to bloom and for me to start the process of healing. But God had other plans again. He often does.

Without my consent, that stump grew its leaves. Then it had the temerity to produce a single white blossom. Unwilling to relinquish my denial, I allowed that pure, white flower to turn brown without much more than a fleeting glance from me. The bush, however, isn’t dependent on my will to make it grow or not, so it continues to defy me.

In the course, of these many trials I have wrestled with what I perceived as an inability to pray and a test of my faith. In the weakest moments, I’ve cried out, “My God, why have you abandoned me?”

Listening for the answer, I’ve heard nothing. Having given those five roses to Mother, I’ve felt unable to give her anything more or even to ask for her intercession.

Adoration and Mass have brought me comfort and temporary peace, but inside an emptiness has remained. A small prayer formed from this loneliness. I simply say, Here I am Lord, I am empty. I have nothing left to offer, but I am Yours. Fill up my emptiness with Yourself. Click To Tweet

A recent gospel reading ended with the command, “Whoever has ears ought to hear” which might also include whoever has eyes ought to see. Today I realized that I have been watching God’s love bloom in my yard and in my empty places.

My soul is a rose bush planted in His Divine Marian garden. He has fed me with His word, nurtured me with His love and caused my heart to bloom with hope. He used my affinity for these simple creations of His to teach me. Like the parables He used to explain the kingdom to His disciples, so are the rose bushes He is using to help me to understand.

There is one tiny white rose in bloom right now on Matthew’s bush and another bud due to burst. The bushes that began my ritual have decided their rest is over. They, too, are ripe with buds.

I’m not sure that my time of mourning has fully ended, but I understand that my roots are planted deeply in faith. And God’s love has the power to transform my ugly emptiness into something beautiful and fruitful.