A Light to Deliver Me from the Mire of Status Quo

Some refer to them as “lights,” those words or phrases that jump out at you in scripture. Perhaps you’re seeking direction or maybe you’re just listening or reading with no clear intent when the Holy Spirit speaks to you in particular. Lights illuminate your thoughts making clearer your path in faith. Being rather hard-headed and a bit simple, I sometimes require a light of the interrogation room variety.
Life in Brelinskyville had been drumming away as we transitioned to the addition of a new member along with all that that entailed. Typical of me, I was trying to preserve the status quo as much as was motherly possible. That status included returning to our year-round school schedule, balancing the household (precariously) and maintaining the appearance of normalcy (gracefully) all while functioning in a state of sleep-deprivation and hormonal shifting.
Sure I’d let a few things slide along the way, but no one would notice anyway. Really, who else was monitoring the full-time education of seven students around the dining room table with a nursling in her lap after having actually showered and dressed for the day? Comparing myself to my perception of others, I reasoned my household was doing pretty well. In fact, after watching ten minutes of the news, we were doing outstanding. I suppose that’s where I started to veer off the path, by making comparisons (okay, maybe my wheels were already slightly off-course and now I was just bearing a hard left).

Enter into my picture of household orderliness a house guest. A pious gentleman, whom we’d only had a one time previous meeting with, called and asked if he could take us up on an invitation to lodge here. “Of course,” I replied and then instantly began rearranging furniture in my head so as to provide adequate sleeping accommodations. So what that we were still adjusting to our four week old and my energy level was only slightly better than vegetative, my status quo maintenance skills were well honed.
Arriving late the first evening, the house guest was very soon witness to the

regular model of disciplinary action in our household (noses on the wall) when the four youngest refused to drift peacefully into dreamland. My husband ordered the punishments and left me in charge of releasing the offenders after ample rehabilitation time. Not wanting to drag out the wall time or risk our house guest having to listen to repeated “Can I get off now?-s” I dismissed the perpetrators soon after. 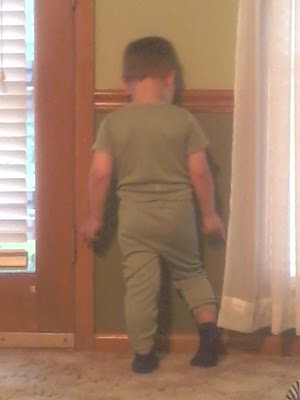 At rise and shine time, Mr. Guest questioned my four year old when he failed to giving thanks for his breakfast. Now it became glaringly obvious that I’d been lax in teaching my little ones to say grace before every meal. No problem, I’d attempt to remedy my omissions on the spot, to which my preschooler became downright obstinate. Moving passed that power-struggle moment with a composed grin, Guest and I reclined at the table for a short spell to chat. However, my littles found that to be the ideal time to whiz by us (repeatedly) like Road Runners as the dog gave barking chase in time with their “joyful” noise (yelling). Engaged in conversation with number eight slung around me, I made a few feeble attempts to garner their attention and quiet the disturbance, but all was ignored. Oh yeah and then there were the multiple rude attempts to interrupt the adult conversation.
Our guest’s slate full for the day, he hit the floor in the direction of an exit. Now to be perfectly clear and honest, he was a completely charitable gentleman and never once did he scowl or utter a negative evaluation of the chaos and he DID have appointments (he wasn’t just fleeing the scene). Then on his way out of the door, he dipped his hand into our holy water font only to come up dry (because even though we have supplies of holy water no one has remembered to fill that font in I’m not sure how long).
The status quo wasn’t looking so optimal by 10am. 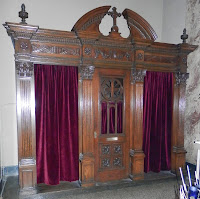 After an examination of conscience I determined that confession was my best destination and hope. While I was busy drawing self aggrandizing comparisons, I’d been blind to the plank in my eye. Sure I might reason that my mothering skills were hitting the mark more often than some, but what did that really matter if I was missing other necessary targets. God has plans for me, with that alone I should be concerned. And as for my status quo I guess that’s my comfort zone, the place to which I’ve become accustomed. It’s easier there, in my comfort zone, even if a bit chaotic.
Having made the cut in the confessional line, I’d resolved to do better even if I wasn’t quite sure what all that entailed. Then, Mass begun, I listened intently to the first reading Jeremiah 38:6 and CLICK a glaring light dilated my pupils.

So they took Jeremiahand put him into the storage-well of the king’s son Malchiah in the Court of the Guard, letting him down with ropes. There
was no water in the storage-well, only mud, and into the mud Jeremiahsank.
“Into the mud” stuck for me like, well like, mud kicked up on your face when your four-wheelin’. I was stuck, stuck in my self-appointed routine, stuck in my comfort zone and God was gently coaxing me out of the mire.
Then the responsorial psalm, Psalms 40:2 reminded me that there was help.

He pulled me up from the seething chasm, from the mud of the mire. He set my feet on rock, and made my footsteps firm.

But wait, there’s more…the second reading Hebrews 12:1-4 kept up the illuminating pressure
With so many witnesses in a great cloud all around us, we too, then, should
throw off everything that weighs us down and the sinthat clings so closely,
and with perseverance keep running in the race which lies ahead of us.Let
us keep our eyes fixed on Jesus, who leads us in our faithand brings it to
perfection: for the sake of the joy which lay ahead of him, he endured the cross, disregarding the shame of it, and has taken his seat at the rightof God’s throne. Think of the way he persevered against such opposition from sinners and then you willnot lose heart and come to grief.In the fight against sin, you have not yet had to keep fighting to the point of bloodshed.
This light seemed to displace all shadows now. Sin was no doubt clinging to me, or maybe me to it. I have to keep running this race and not, like the hare, take a break because I suppose I’m at least faster than the worldly tortoise. My eyes need to remain on Jesus not on Jane or the Joneses. I have to forget the (self-perceived) shame that might be connected to my human failures and try harder, not just settle in the routine. Grief (and frustration) may be part of the package, but I can endure if all is for His glory.
Finally, the gospel Luke 12:51 proclaimed

Do you suppose that I am here to bring peace on earth? No, I tell you, but rather division.

At which point I nearly stood up, hands raised, crying out, “Amen and halleluiah, He’s talking to me! I hear ya, Jesus!” My ideal of peacefully muddling through the mire of my days without too much division on the part of my troops was a losing proposition.

Shirking off my responsibility to enforce my husband’s punishments taught my children that parents are not united and dismissed his rightful authority. Worrying about overall appearances while forgetting the little details in properly catechizing my students will add to the pool of misguided Catholics. Allowing my children to ignore my role as mother and tune out my admonitions sets them up for sorrow when they carry their lack of respect into adulthood. Privately, laying aside my prayer life too often and filling my time with secular distractions has left my font dry.
Indeed family life will never be perfectly harmonious nor will we all get everything right all of the time, but we must persevere in this race toward home Perhaps I need some side blinders to keep my focus facing forward (not sideways). Christ didn’t leave us an example of ease and comfort and certainly He wasn’t striving to maintain the status quo. I’ll admit this light caused some uncomfortable squinting on my part, but in time my eyes will adjust and my whole household will benefit from the clarity.