Typically a coward of heights, I never dreamed of spending my days balancing atop an extension ladder, but the chipped and peeling exterior of our house begged for attention. My dutiful husband is a jack of many trades from fixing appliances to building chicken coops, but he proclaims a particular aversion to painting; therefore, the task of revitalizing the outside of our 1920’s home fell squarely on my shoulders.

After choosing the perfect hue of buttery yellow, which my neighbor equated to the color of “cheap vanilla yogurt,” I commenced the jobs of scraping and repainting the easy-to-reach portions. However, it didn’t take long before my arms-reach, as well as, my three-step ladder were insufficient. Lacking the superhero trait of Mr. Fantastic, I had to engage some problem solving skills. Without the gift of stretchable appendages, a ladder seemed my next best option.

It took a little self-hypnosis of sorts to talk myself up that first ladder, but work awaited and the time of a busy, home school mother is fleeting. I let go a little and convinced myself that a fall from a standard ladder couldn’t inflict too much damage.
Now our lovely little home was built on a downgrade, so while the front door was a mere three steps from the solid ground, the rear was two-stories above stable earth. That standard ladder only raised my stature to the lower heights of the our home’s backside and painting only half of the house didn’t appear sensible. An extension ladder became unavoidable.

As far back as I can remember, heights have posed an unwelcomed challenge. I was the kid who scaled the jungle-gym only to become paralyzed at the summit and tearfully beg for rescue. Ferris wheels are totally off-limits and even today escalators require a mental strategy.
Ratcheting the extension ladder far above my comfort-level, I offered myself a pep talk. First I attempted flattery, telling myself how brave I was and how beautiful the house was going to look. Next, came reasoning, if we couldn’t afford to hire a painter, I simply needed to finish the job I’d begun and set the right example for my children. Lastly, delusions of Supermom grandeur flitted across my brain, but they were too readily refuted by the reality that I’d never been able to scale a tall building nor race anything much faster than a speeding toddler headed for an open outlet.
Step by step, paint supplies balanced in my right hand as my left hand secured its death grip on the metal side rail, I inched ever higher toward the firmament. Positioned at the ladder’s apex, I briefly dared to look down, a long, long way down. The flattery suddenly flattened and that reasoning seemed less, well, less reasonable. My previous risk estimations made from atop the standard ladder somehow didn’t ease my mind because from this height surely parts could break that might not be mendable.
Surrender and prayer were my last and best resorts. “Let go,” I persuaded, “let go of the fear.” Fear constrained me to the ground, but surrender could loose its hold. Reciting a prayer, I offered up my terror and released myself to the care and keeping of my guardian angel.

It’s amazing how fear has the potential to overpower in some cases or to protect in others. Years ago I read a book by Gavin DeBecker called The Gift of Fear. In it Mr. DeBecker gave real life examples of how people’s natural-born fear mechanism or intuition set off red flags and sirens in the presence of serious dangers. Those who listened typically avoided entering the danger zone or quickly fled before a perpetrator could inflict harm. Those who over-rationalized away their instinct generally paid a painful price. In those cases, fear was a gift bestowed on the individual, a signal by which they could gauge a circumstance or assess a stranger’s unspoken intent.
While teaching Natural Family Planning, I realized that fear really needs to be addressed. Often we have lovely, young couples register for our course to fulfill a marriage preparation requirement. Or sometimes they’ve attempted to self-study and feel the need for more instruction. Patiently they sit through our witness talk and intently they follow along with the training, but sometimes I can see it in their faces or detect a hint of it in their questioning. The fear, the fear that they are not smart enough or vigilant enough to learn and apply the method of fertility awareness so as to prevent an unintended blessing.
The simply admonishment, “Be Not Afraid’ would do little to help alleviate their worries. Instead the first step is to help them face their fear, to understand what misconceptions it may be tied to. Quite often the newly engaged or married women have been controlling their cycles through the use of hormonal birth control or contraceptive devices. These “outside forces” have led to the perception that fertility, or at least its suppression, is the responsibility of some “thing” not the individual woman.

Under the supposed control of a contraceptive, a woman may feel relinquished of her role in her own “healthcare” beyond the routine exam and prescription refill. If an unexpected blessing comes along, she can “blame” the little one on a contraceptive failure. Our current culture has led her to surrender herself to doctor’s orders, so she typically never feels obliged to consider the risks (unfortunately too often doctors don’t even bother to disclose the very real risks).
Here we, NFP teachers, are describing the difference between more fertile and less fertile, fertile mucus. Calculating 4/10° temperature shifts while determining the position and firmness of the cervix. Observation, charting, cross-checks, and prayerfully discernment are all necessary steps to becoming naturally aware of the signs and wonders of the female fertility cycle. NFP can scientifically claim an effectiveness rate of 99%, among other benefits, but it does require personal responsibility.
In the words of Spiderman’s uncle, with great power comes great responsibility. The power to plan a family is definitely great, a great honor, a great blessing. But, our culture isn’t much interested in personal responsibility, especially when profit can be made off of the notion that power comes from a pill or injection.
Fear, in the case of our students, isn’t a helpful natural instinct, but an emotion fueled by a man-made distortion. Truly, the effectiveness rates of NFP are equal to the best contraceptive rates (though that doesn’t mean they are morally or ethically equal). If a couple discerns a serious call or reason to postpone a new pregnancy, they are able to apply their knowledge to figure out what days of abstinence are required. Every couple is smart enough, every couple can learn to be vigilant enough to achieve their goal of postponement when necessary.

What is really at stake is the fear that a baby, an eternal soul, will be conceived and that they will not be able to care for or welcome the new member of their family. Like the extension ladder, they realize they might need to ascend above their comfort-level. They must accept total responsibility for their marital embrace, it must become something more than a carnal pleasure alone.
Yes, they should set their ladder on stable footings by learning how to accurately read the woman’s bodily signs of fertility and infertility. Indeed they’ll have to map out the location by communicating their dreams, and plans and needs. They’ll raise their spiritual ladder by praying together and seeking God’s Will each cycle. And ultimately, they will need to step up by assuming responsibility individually, through self-mastery of their sexual desires, and together, through a unified commitment to remain open to life. 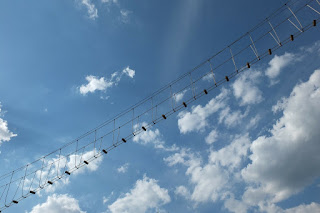 At times they may need to surrender themselves, to surrender their fears, to surrender their man-made plans. Because often God will change a couple’s heart. He’ll challenge their limited notion of happiness. But while a fall from the height of my extension ladder had the potential to inflict fatal harm, a careless slip in NFP can result in the gift of a brand new life.