Simeon’s Blessing: A Reflection on Loss and Grace

We were thrilled when my fertility charts unveiled the blessing of a new baby. One of the joys of charting is that we are in tune with our mutual fertility and we are able to express our intimate love for one another while anticipating that that love has the potential to spring forth into a life of his/her own.

Many of my friends know my story about how I turned my heart and fertility over to Jesus through the hands of my Blessed Mother nearly 10 years ago. Greg and I had faced a tremendous trial that threatened to tear our marriage apart and I was confused and frightened and receiving lots of misguided advice. We were already the parents of four living children and one angel, so I wondered whether I needed to “protect” myself by withholding part of me, my fertility. Dropping to my knees and offering it all over to Our Lady was a defining moment in my life and I’ve never been the same since.

Recognizing Our Childbearing Years Will End

As I get older, I recognize that the day will come when childbearing will be beyond me and so I really took the time to thank God often for this new baby. And of course I have the perspective of having lost Dimitri 15 years ago to remind me daily that life is precious and fragile. When the little discomforts like nausea and fatigue set in it was my opportunity to offer up those small sufferings in a way I hadn’t with other pregnancies. I am so glad.
When I was about 11 weeks along the whole crew of us had the privilege of “meeting” our baby via an ultrasound. I hold tightly to the memory of that little body lying still with heart beating until his siblings entered the room at which point he began to turn around as if he was ready to play with his five brothers and two sisters. I have mixed feelings about ultrasounds, as I think they are too often overused or, worse yet, misused, but this one was to be a great blessing.
I made it passed the 12 week marker which is a general relief for pregnant mothers as it usually signals that the baby has a good start and is firmly planted in the womb. But then in my 13th week I noticed internal spotting and a sense of fear and dread erupted. We spent a bit of time trying to discern the best course of action for our baby and so we followed some advice and headed to the emergency room. I had only one burning question to be answered, “Was our baby still alive or had my womb become a grave for my sweet little one?”

The Horror And The Wait

The experience of that day was a horror. Our dignity was disregarded and compassion was no where to be found, but in reflection I simply hope and pray that my witness was of value and that my humiliation was an offering. We learned that our expected child had died while still cradled in my womb and in a moment our dreams and plans for this child vanished.
I had two distinct prayers from that day on, that I could deliver our baby away from the harsh world and that I could be spared from surgery. For the next few days we waited, but no progress was made.
Our wonderful priest called and encouraged me to ask God to reveal the sex of this baby and the name to be given. What a comfort and affirmation of life he offered.
My attempt to induce labor on Friday was to no avail and so I tried again on Saturday. I was blessed to bring about the dilation of my cervix and on Sunday morning I felt that warm rush of my water as it broke and the gentle release of my tiny baby. I called out to Greg, who joined me as I reached down and lifted our son into the palm of my left hand. So quiet, so peaceful was that moment. I gazed in total awe at him. God answered my prayers. I could clearly recognize that we had another son and I could count his ten fingers and ten toes. He was beautiful, albeit only about two inches long from the top of his head to the end of his tush. His eyes were closed and I could see that he had the special smile of a cleft lip. Like any mother I had to take it all in, every bit of him.
On his backside I discovered the sign of a neural tube defect and I came to better understand that God’s mercy was at work. That is not to say, that we would have wanted him any less if he’d been born with challenges or that God does not have great purpose for children of all abilities and disabilities. There was sadness, but I don’t remember crying much in those early hours because I was overwhelmed by the gift of this brief time with my son, Simeon Christian. 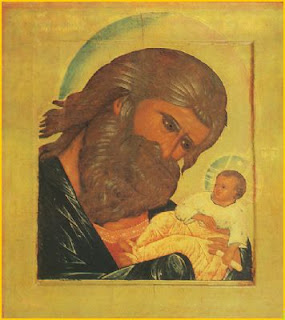 The time came when I realized that we needed a place to lay his body until his burial. I was mulling this over when I walked passed my dresser and a long forgotten box caught my eye. It was a little brown box with a cross on the top and, as I discovered when I lifted the lid, a picture of Our Lady was on the inside. Lilia had made it for me, but I can’t even remember when. Now God drew my eye to it and it became apparent that it was meant for Simeon all along.
God had clearly revealed to us that we had another son and now we understood that he was to be called Simeon Christian. To be honest, it was the only boy name that we’d chosen (we had a number of girl names) and we realized that if that was the name intended for him in life it still belonged to him in death. A few days later, I was reflecting on this and I couldn’t remember who Simeon was in the Bible, so I asked in prayer. Not an hour later an email arrived from a friend which told about her recent study of Simeon, the man at the temple who held Jesus at the Presentation.
The second half of Sunday consisted of another trip to the ER where I was allowed to bleed for too long. There was a period of time in which I thought it possible that I would be joining Simeon and I felt a strange sense of calm and peace. I needed only grace and prayed in reparation for my sins and then trusted. God answered my prayer as I was spared from the emergency surgery that had seemed eminent and the hemorrhaging stopped. After a transfusion, we were able to return home.

On Monday we, along with our priest, buried our sweet baby in our Marian garden. On Wednesday our priest celebrated a memorial Mass for Simeon at which his brothers served.
Friends have been so generous as to bring us meals which has been more help than they might know as it is taking me longer than I’d hoped to recuperate physically. Emails, cards and a few phone calls have come when I was feeling especially low. Grace and blessings have been poured out upon us for which I am ever thankful.
But it has to be said that the pain and sorrow of losing another child isn’t somehow less gut wrenching because he was so young. I remember well the loneliness of grief when we lost Dimitri 15 years ago. It was a deep searing sorrow I’d prayed would never be revisited, but God’s plans are far above my own and so I must work through it all again. Ten years ago when we went through that first trial, a counselor had me reflect often on a particular verse. In the last week that verse has been presented to me again and again through a variety of means. For I know well the plans I have in mind for you, says the Lord, plans for your welfare, not for woe! Plans to give you a future full of hope. When you call me, when you go to pray to me, you will find me. Yes, when you seek me with all your heart, you will find me with you, says the Lord, and I will change your lot. Jer. 29:11-14 I’m listening, Lord.

To Be People For Life, We Must Realize Its Connection To Death

Additionally, Greg and I had quietly endured the loss of another baby when we moved to our current home 3 years ago. We’d buried the remains in the Marian garden all alone. I’d felt the baby was a girl and named her Mary in my heart, but I never shared that with anyone, not even Greg. As he blessed Simeon’s grave, Fr. Meares mentioned moving the angel that sits next to Mary because he had no idea. All of this led Greg and I to tell the children about their third sibling in heaven which has been so freeing. I’ve carried around the guilt of never having given her proper recognition. Dimitri, Mary and Simeon are my children and I miss them so. I hold fast to the knowledge that I’ve succeeded in my job of getting them to heaven and in the hope that someday their prayers will reunite us. Until then I entrust them to Jesus and ask their Blessed Mother to hug them often on my behalf.
I understand that it is difficult to know the words to say to us, but all we really need is simple. Ask, “How are you doing?(really doing)” We need to have his life acknowledged. You never had the chance to behold his face, but that doesn’t mean he wasn’t here. We need a sincere hug, the kind that melts away the barriers. There may be tears, but tears are part of the process.
To be a people for life, we must remember it is connected with death. We are blessed to celebrate the joy of Easter every year because we first recall the sacrifice and sorrow of the cross. And so it is for those of us who are enduring the loss of a child, we cannot skip the pain and hope to find complete healing.
Thank you, Dearest Jesus, for the blessing of Dimitri Mikhail, Mary and Simeon Christian.